Renewable sources to supply over half of Europe's electricity by 2030

Europe is likely to get over half of its electricity from renewable sources by the end of the next decade if EU countries met their climate pledges,  a draft commission paper reveals. 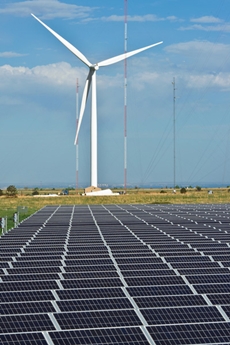 According to the leaked text, which The Guardian claimed to have seen, the planned overhaul of the continent's electricity grids would now need to be speeded up.

''Reaching the European Union 2030 energy and climate objectives means the share of renewables is likely to reach 50 per cent of installed electricity capacity,'' says the consultation paper, due to be published on 15 July.

''This means that changes to the electricity system in favour of decarbonisation will have to come even faster.''

The EU has set a goal of cutting emissions by 40 per cent on 1990 levels by 2030, and an aspiration for a 27-per cent share for renewables across Europe's full energy mix, in sectors such as transport, agriculture and buildings that did not necessarily rely on electricity.

Renewables currently, supply around a quarter of Europe's electricity.

According to Oliver Joy, a spokesman for the European Wind Energy Association who welcomed the draft text, the 27 per cent goal for 2030 was non-binding, and some countries appeared to even miss an earlier goal for 2020 that was binding.

Meanwhile, a post-2020 climate-control action plan, to be submitted by China to the UN by the end of this month, would have a huge influence on future global energy research and innovation, the head of the Abu Dhabi-based International Renewable Energy Agency said.

Adnan Amin, IRENA's director-general, said in Beijing yesterday that the agency was "very excited" about the announcement. He called the plan "a signal for the clean energy industry, not only in China but also for the whole world".

According to Xie Zhenhua, special representative for climate change affairs at the National Development and Reform Commission,  the plan could involve estimated investment of over 41 trillion yuan ($6.6 trillion) by 2030.

China accounted for over a fifth of all global energy consumption, and industry experts had said such a high level of investment would greatly promote research and innovation of renewable energies.