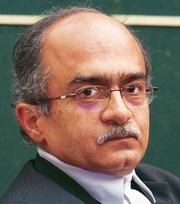 Lawyer Prashant Bhushan, who has filed a public interest suit against Central Bureau of Investigation director Ranjit Sinha, today refused a Supreme Court directive to reveal the name of the person who provided him with Sinha's residential guest book.

Bhushan's NGO, Centre for Public Interest Litigation (CPIL), told the court that the life of the 'whistleblower would be in danger if his or her name is revealed.

The Supreme Court had earlier this week directed Bhushan to reveal his source of information regarding the visitors' list, which he claims to have obtained, and name the informant in a sealed cover.

Sinha has consistently maintained that the log of visitors at his residence is a forgery, with 90 per cent of the entries faked, although the rest may have been genuine.

The case revolves around allegations that Sinha met at his residence top business functionaries whom his agency was investigating in various scams, thereby compromising the CBI investigation. The petitioners, led by advocate and Aam Admi Party leader Bhushan, insist that he be removed from office.

Last Saturday, the Central Bureau of Investigation chief had said that Prashant Bhushan could not claim immunity from disclosing the name of the person who provided him the list of visitors, demanding that he reveal his source.

The apex court has directed its registry to keep all the documents and affidavits filed by CBI director in a sealed cover and deposit them with the secretary-general for safe custody.

Bhushan in his petition alleged that the guest list showed that the CBI chief frequently met the accused in the 2G and coal scams at his residence, and hence he should not be in charge of the probe.