A high-level government committee has suggested that at least 23 hydropower projects should be scrapped in the flood-prone Himalayan state of Uttarakhand, as badly managed power projects were largely to blame for the devastating floods last year that killed thousands of people and caused extensive damage, apart from crippling the state's largely tourism and pilgrimage-based economy. 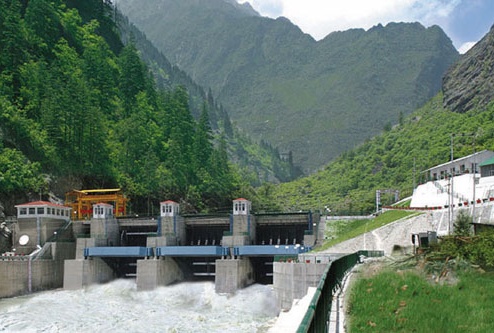 In a report commissioned by the ministry of environment and forests, a panel of 11 experts said that hydroelectric plants had led to the build-up of huge volumes of sediment in rivers that was not managed properly. The report was submitted to the ministry on 16 April, and some details made their way to the media on Tuesday.

The experts found that the sediment raised river beds during the floods and was then flushed downstream, aggravating the severity of the flooding.

''After considerable discussions and analysis, the expert body concluded that of the 24 proposed hydropower projects (HEPs) that the Wildlife Institute of India (WII) recommended for review, 23 HEPs would have significant and irreversible impacts on biodiversity values.

''The EB (expert body) recommends that for the 23 proposed HEPs out of the 24 identified by WII that would have irreversible impacts on the biodiversity of the Alaknanda and Bhagirathi Basins, and the HEPs that fall in any of the following conditions should not be approved for construction,'' the report said.

The report, titled Assessment of environmental degradation and impact of hydroelectric projects during the June 2013 disaster in Uttarakhand, comes after the Supreme Court intervened and insisted on an examination of the state's environmentally destructive policies. The committee was appointed by the ministry in October 2013 following a Supreme Court order.

The expert body headed by Dr Ravi Chopra stated, ''Enhanced sediment availability from and in paraglacial zones could be a serious problem for the longevity of the existing, under construction and proposed hydro power projects in Uttarakhand.

''Therefore, EB recommends that the terrain above the MCT in general and above the winter snow line in particular should be kept free from hydropower interventions in Uttarakhand.''

Noting the importance of the Himalayan watersheds to India's sustainability, the committee also suggested the creation of a national Himalayan policy.

Uttarakhand was hit by its heaviest rainfall on record in June 2013, causing lakes and rivers to burst their banks, inundating towns and villages below and triggering massive landslides, thanks largely to deforestation and ill-planned development.

"Can it be a mere coincidence that the maximum destruction of land and property occurred in areas downstream of hydro-power projects?" the experts asked, referring to three projects in particular.

The official death toll was 900 with more than 5,700 people declared missing, making it the deadliest ever in the mountainous region. Floods or landslides also washed away or damaged 5,000 roads, 200 bridges and innumerable buildings.

The experts rejected suggestions that the extent of the flooding was caused by deforestation or the breaching of dams brought on by landslides, as was the case in previous floods.

Authorities urgently needed to conduct region-wide assessments of the impact of projects rather than consider individual plants in isolation, the panel said, adding that the 23 proposed power projects it has proscribed are within areas of significant biodiversity.

Companies with hydroelectric interests in the state include Jaiprakash Power Ventures Ltd, GVK Power & Infrastructure Ltd and state-run NTPC. The companies did not immediately respond to requests for comment.

Himanshu Thakkar, co-ordinator of the South Asia Network on Dams, Rivers and People, a Delhi-based environmental group, told NDTV that he welcomed the report, but limiting the study to two of the state's river basins had weakened its findings.

"Most of the recommendations are useful but some of them are a bit weak," he said. "We think they should have asked for all work on the 24 proposed projects to stop immediately - they should have said this explicitly."

Hydroelectricity accounts for about 18 per cent, or 40,000 megawatts, of India's installed generation capacity, while another 14,000 mW are under development, government data shows – but if the report comes to the attention of the Supreme Court, all aware Indian citizens must hope that the new government to be formed next month will implement at least some of the suggestions.