Even as the debate over fracking hots up in the UK, the future of the energy source in the UK and Europe might hinge on what happens on a patch of ground in northwest England, over the coming months. 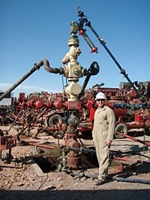 A large amount of shale gas is estimated to be in the ground in northern central UK, especially in the industrial Manchester - Liverpool region.

If the estimates are accurate, there may be enough gas in the region to make it a major gas hub, and could do for the region what North Sea oil did for Scotland.

Across the Atlantic, thanks to the new energy source, the US suddenly finds itself self-sufficient in natural gas.

But fracking has its downside as highlighted by environmental groups and reception to the new energy source in Europe has been decidedly hostile with many countries dead set against it.

In France, the nation's highest court recently upheld the government's right to ban fracking, with fracking activity suspended in Germany, at least until a new government is formed.

However, within the EU, the UK has been looking at declining North Sea oil supplies as reserves dwindle.

Further, with coal frowned upon as dirty, and nuclear power expensive, the government has officially encouraged the development of shale gas. Prime minister David Cameron has shown willingness to pull out the stops, in a bid to reap some of the benefits seen in the US.

Meanwhile, a major survey would soon be launched in Scotland to estimate the extent of shale gas reserves, estimated at £5 billion.

Shale gas deposits discovered in the North of England could supply the UK's gas needs for four decades, according to scientists.

The British Geological Survey (BGS) had also been working to estimate, the amount of gas underneath South-east of England, with expected completion by end of the year.

In evidence given to the House of Lords' economic affairs committee, BGS officials revealed they were shifting their attention to Scotland.

According to Mike Stephenson, the director of science and technology at the BGS, it was sensible to concentrate on the areas with the most potential.

In a report released earlier this year PricewaterhouseCoopers said Scotland was in a prime position to ''capitalise'' on shale gas.

According to the report, shale gas ''has the potential to reshape the global economy, increasing energy security, independence and affordability in the long term''.