The Anil Dhirubhai Ambani Group (ADAG) today said it would consider merging group companies Reliance Power and Reliance Natural Resources. It said the boards of the two companies - one in the business of generating power and the other in trade and transport of oil and gas - will meet in Mumbai on 4 July to consider the merger. 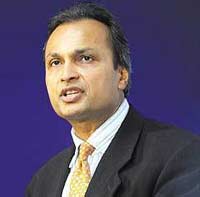 The statement, which did not specify the need for the proposed merger, was released after the close of stock market, but speculation about the deal pulled down the share of both the companies sharply in the last minutes of trading.

While the companies did not disclose any details of the proposed merger, some brokers said that rumours are about a share-swap deal with four shares of RNRL for every one R-Power share. Currently, the two stocks have market values in the ratio of about 1:3.

The two companies together command a market capitalisation of Rs50,000 crore.

"A meeting of the board of directors of the company will be held on 4 July to consider merger of Reliance Natural Resources with Reliance Power," the two companies said in identical regulatory filings with the stock exchanges.

Late last month, RNRL signed a revised gas sales master agreement with Mukesh Ambani-led RIL for sourcing gas for Reliance Power. But the agreement did not specify the price, quantity or duration of supply of gas.

Reliance Power, on its own and through subsidiaries, has a portfolio of almost 35,000 MW of power generation capacity, both operational as well as under development, including three ultra-mega projects.

Reliance Natural Resources is engaged in the business of sourcing and transportation of gas, coal and liquid fuels. It is the second largest player in the coal bed methane business in India in terms of acreage and has significant oil and gas blocks in Mizoram.