LPG subsidy to go by March 2018, prices to rise Rs4 every month

The government has directed state-run oil marketing companies to raise the prices of subsidised cooking gas (LPG) by Rs4 per cylinder every month, so as to achieve full elimination of consumer subsidies by March 2018. 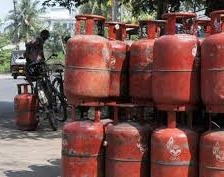 "Public sector oil marketing companies (OMCs) were authorised to increase price of subsidised domestic LPG cylinder by Rs2 per cylinder (14.2-kg) per month (excluding VAT) with effect from 1 July 2016,'' the minister pointed out.

Now, the quantum has been doubled so as to bring down the subsidy to nil, he said in a written reply in the Lok Sabha here.

"The government vide its order dated May 30, 2017, has again authorised OMCs to continue to increase the effective price of subsidised domestic LPG by Rs4 per cylinder effective June 1, 2017, per month (excluding VAT) till the reduction of government subsidy to 'nil', or till March 2018, or till further orders, whichever is earliest," he stated in his reply.

Every household is entitled to 12 cylinders of 14.2-kg each at subsidised rates in a year. Any requirement beyond that is to be purchased at market price.

Oil companies have raised rates twice since the May 2017 direction, the last being on 1July when rates were up by a steep Rs32 per cylinder - the steepest increase in six years.

This hike also reflected the hiked tax rates under the Goods and Services Tax (GST) regime.

The rate of non-subsidised LPG, which consumers pay after exhausting their quota of below-market priced bottles, costs Rs564.

"The price for the other subsidised cylinders (i.e. 5 kg) would be increased proportionately by the OMCs," Pradhan said.

There are as many as 181.1 million customers of subsidised LPG in the country. These include 25 million poor women who were given free connections during the last one year under the Pradhan Mantri Ujjwala Yojna.

There are another 26.6 million users of non-subsidised cooking gas.