In an apparent retaliation to India's decision to cut crude imports from Iran, Tehran has signed a basic agreement with Russia's state-owned energy giant Gazprom for development of the Farzad-B gas field, discovered by a consortium of Indian companies. 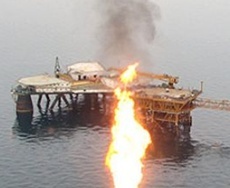 The Farzad-B gas field, discovered by Indian state-run oil explorers led by ONGC Videsh Ltd (OVL), the overseas arm of Oil and Natural Gas Corporation, in the Farsi block in 2008, has in-place gas reserves of 21.7 trillion cubic feet (tcf), of which 12.5 tcf is recoverable.

The project has so far cost the OVL-led consortium, which also includes Oil India and the Indian Oil Corporation (IOC), over $80 million.

Tehran's decision will hit India's ongoing participation and investment in development of oil and gas sector in Iran and potentially damage India-Iran relations.

Iran has been going slow on the award of contract for the gas field and, despite the bonhomie shown by leaders of the two countries when Indian Prime Minister Narendra Modi met Iranian President Hassan Rouhani in Tehran last year, Iran has been reluctant to award the contract to India.

The agreement with Gazprom clearly indicates Tehran is guided by purely commercial considerations and that was the reason for the stalemate in negotiations on the project that started in 2008.

Iranian oil minister Bijan Zanganesh is reported to have justified the Iranian National Oil Company's move to sign an agreement with Russia saying that it was because of India's failure to finalise a commercial contract for Farzad B with Iran.

The fact remains that since the lifting of the sanctions last year, Iran has been reluctant to award of rights to develop Farzad-B gas field to OVL and as the row over the rights escalated, India asked its state-owned oil companies to cut imports from Iran by nearly 25 per cent.

Zanganeh's announcement, made in an interview to Argus publication, follows his threat to replace the Indian consortium led by ONGC Videsh in Farzad-B development.

Iran was earlier reported to be weighing the option of inducting companies from other countries to replace the Indian consortium or relegate Indian companies to developing a small part of the offshore field.

Government officials in New Delhi continue to downplay Iran's preliminary deal with Gazprom, saying they were positive about a formal deal.