The union cabinet has approved the award of 31 discovered small oil and gas fields surrendered by Oil and Natural Gas Corporation of India (ONGC) and Oil India Ltd (OIL), as part of the government's efforts to speed up oil and gas production and improve the country's energy security. 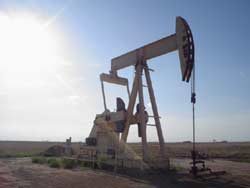 The Cabinet Committee on Economic Affairs (CCEA), chaired by Prime Minister Narendra Modi, on Wednesday gave its approval to award of contract in 31 contract areas, including 23 onshore and 8 offshore of discovered small fields.

The CCEA awarded 31 of the 34 blocks for which bids were received. The bid winners included state-owned refiners BPCL, HPCL and IOC as also a company floated by directors of drug maker Sun Pharmaceuticals.

Development of these small oil and gas fields, which will unlock $7 billion in oil and gas assets, is crucial for Prime Minister Narendra Modi's plan to reduce oil imports by as much as 10 per cent by 2022.

The awarded blocks will boost India's oil output by as much as 15,000 barrels of oil per day and gas production by 2 million standard cubic meters a day, according to the oil regulator Directorate General of Hydrocarbons.

These fields were discovered long back but could not be monetised due to various reasons such as isolated locations, small size of reserves, high development costs, technological constraints, fiscal regime etc.

These small fields are estimated to have in-place hydrocarbon volumes of 40 million tonnes (MMT) oil and 22 billion cubic meters (BCM) of gas, which can be monetised over a period of 15 years. Production from these contract areas will supplement domestic production.

For early monetisation of these fields, the cabinet had, in September 2015, approved 69 marginal fields for offer under Discovered Small Fields Policy. Out of these, 67 discovered small fields were clubbed into 46 contract areas and put on offer through online international competitive bidding.

Sun Petrochemicals Pvt Ltd, a privately-owned company formed by the directors of Sun Pharmaceuticals Industries Ltd, won the B-37 Cluster in Mumbai offshore, for which it was the sole bidder. It had bid for 6 out of the 46 fields that were auctioned last year.

At the close of the bids on 21 November last year, 34 areas were sought for, with 14 getting single bids. The fields were taken away from state explorers Oil and Natural Gas Corporation (ONGC) and Oil India Ltd (OIL).

Cairn India, which bid for two fields, returned empty handed. Hardy Exploration of the UK too was unsuccessful in its bid for one field. Adani Welspun won one field while Nippon Power Ltd got two.

ONGC as also Reliance Industries did not bid in the round. OIL, which too had surrendered unviable fields, bid for as many as 3 fields albeit in consortia with companies like HOEC, Prize Petroleum (upstream unit of HPCL), Oilmax Energy and IOC. It won 1 field. Other fields were awarded to smaller and lesser known companies.

A total of 134 e-bids were received for 34 contract areas. A total of 47 companies submitted bids, out of which 43 are Indian companies and rest four are foreign companies.

These contract areas have been awarded under the new regime of Revenue sharing Model.