Turkmenistan, Afghanistan, Pakistan and India on Sunday signed launched a $7.6-billion gas transit treaty that would allow the construction of a 1,800-km-long pipeline to transport gas from energy-rich central Asia to energy-starved South Asia. 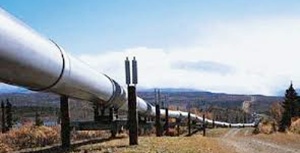 The 1,800-kilometre TAPI pipeline is intended to carry gas from the Caspian Sea in Turkmenistan through the Afghan cities of Herat and Kandahar and end up in the India-Pakistan border town of Fazilka. The project is being funded by the Asian Development bank (ADB).

The TAPI pipeline will have a capacity to carry 90 million standard cubic metres a day (mmscmd) gas for a 30-year period. India and Pakistan will get 38 mmscmd each, while the remaining 14 mmscmd will be supplied to Afghanistan.

Addressing the groundbreaking ceremony of the TAPI Gas Pipeline Project in Mary, Turkmenistan, Vice President Hamid Ansari said the launch of Turkmenistan-Afghanistan-Pakistan-India (TAPI) gas pipeline project marks the first step towards fulfilling the vision of an economically integrated region stretching from the Bay of Bengal to the Caspian Sea.

The vice president said that TAPI is not just a gas pipeline project, but a ''reflection of the common desire of the four member countries to reconnect and a way to re-claim the shared geography and revitalise an age-old legacy of our mutually enriching interactions.''

The launch of TAPI also marks the first step towards fulfilling the vision of an economically integrated region, he added.

At the same time, he reminded all stakeholders of the challenges that lie ahead. ''We must work together to keep away the negative forces inimical to the success of the project. We must recognise that the forces of violence and disruption can no longer be allowed to threaten the quest for economic development and security of our people, he added.

''We need to work together to ensure the technical and commercial viability of the project in its broadest sense,'' he said, adding that the international marketplace for energy works on complex principles.

However, given the widespread poverty that exists in our countries, it is essential to ensure that we can make energy available at the least possible cost to the largest sections of our people, he added.

Ansari thanked the Afghanistan president and Pakistan prime minister for their active involvement in the TAPI gas pipeline project. He had said that their commitment augured well for the entire region.

Pakistan Prime Minister Nawaz Sharif praised the leadership of India and Afghanistan for the success of the TAPI gas pipeline project, a $10-billion project designed to reduce Turkmenistan's dependence on gas sales to Russia and China.

"This is a momentous day and vital moment has been made possible through the perseverance of all stake holders. Our presence at the highest level to inaugurate TAPI is a clear significance we attach to the game changing project and our commitment to its completion. I would like to complement the leadership of India and Afghanistan in making this project a success," Sharif said.

Sharif asserted that TAPI was not just a gas transit initiative connecting energy rich Central Asia with the 'energy starved' South Asia, but a "trail blazing" project that would open doors for greater economic collaboration and integration.

Speaking at the ceremony in the Turkmen desert, Turkmenistan President Gurbanguly Berdimuhamedow hoped the project would be operational by December 2019.

He said the project proves that Turkmenistan can carry such huge amount of gas to places where it is required.

"Today we were participants and witnesses of a historic event. Today marks the start of a project of great scale - the TAPI pipeline," said Berdimuhamedow.

India's association with the TAPI project goes back almost a decade. It began as an observer country at the 9th steering committee meeting in 2006. In April 2008, India was formally admitted as a member of the project.

Since then, India has been actively participating in all the meetings and has been an active votary of the project.

Turkmenistan is believed to have the world's fourth-largest gas reserves, but currently exports mainly to China.