Government support to fossil fuel consumption and production in OECD countries and key emerging economies remains high, at $160-200 billion annually, according to a new OECD report. This support is hampering global efforts to curb emissions and combat climate change.

These include measures that reduce prices for consumers, as well as those that lower exploration and exploitation costs for oil and gas companies.

The OECD has been measuring public support for fossil fuels since 2009, when G20 members committed to phasing out ''inefficient fossil fuel subsidies'' as part of wider efforts to combat climate change.

''The time is ripe for countries to demonstrate they are serious about combating climate change, and reforming harmful fossil fuel support is a good place to start,'' said OECD Secretary-General Angel Gurría.

''Governments are spending almost twice as much money supporting fossil fuels as is needed to meet the climate-finance objectives set by the international community, which call for mobilising 100 billion US dollars a year by 2020. We must change the course. This new OECD Inventory offers a roadmap to turn around harmful policies that are a relic of the past, when pollution was still seen as a tolerable side effect of economic growth.''

Around two-thirds of the measures identified in the OECD Inventory were introduced before the year 2000, and in a very different economic and environmental context. 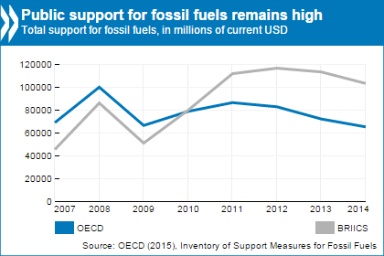 Changing policy priorities make it necessary for governments to rethink the relevance and effectiveness of policies that use taxpayers' money to sustain our reliance on fossil fuels.

The OECD Inventory shows that while slight progress has been made over the past three years, total support to fossil fuels remains high, reinforcing the need for sustained reform efforts. Lower oil prices present a unique opportunity for governments to phase out support for the consumption and production of fossil fuels.

In countries that have seized this opportunity, policymakers must consolidate the gains from reform and resist pressure to reintroduce support should fossil fuels become more expensive in the future, the report added.