Mining and oil exploration are a threat to almost a third of natural World Heritage Sites, according to a report that said companies and investors faced reputational and legal risks by backing such activities. 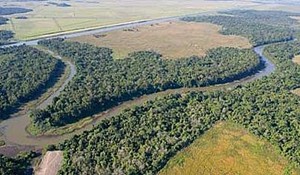 According to research from the World Wide Fund for Nature (WWF) and asset managers Aviva Investors and Investec as many as 70 out of the 229 natural World Heritage Sites were at risk from extractive industries.

These included most of Africa's 41 natural heritage sites, designated by UNESCO as areas that had outstanding natural beauty or ecological significance.

The report aims to encourage investors to use their influence to stop companies from exploiting the sites.

"Protecting these iconic places is not only important in terms of their environmental worth, it is crucial for the livelihoods and future of the people who depend on them," said David Nussbaum, chief executive of the WWF.

According to the WWF, its estimate of the sites at risk was probably conservative.

According to commentators, the record high of 31 per cent at risk was up from 24 per cent last year.

A number of the sites are home to species near extinction in the wild, including mountain gorillas, snow leopards and whales which include the Virunga national park in the Democratic Republic of Congo, Lake Malawi national park, Tanzania's Selous reserve, Canada's Wood Buffalo national park and the Danube delta in Romania.

The World Heritage Sites currently covered under 1 per cent of the planet, however, the number of designated sites was on the rise.

What was worrying was now more sites were in areas that could be opened up to the extraction of oil, gas and mining for minerals and ores, the report published yesterday called Safeguarding Outstanding Natural Value, and written by WWF, Aviva Investors and Investec Asset Management said.

Of natural world heritage sites in Africa, more than six in 10 were under threat from development. Not all of the at- risk sites faced threat from fossil fuel or mining companies - many might be in close proximity to areas marked for extraction, or at risk from the transport and infrastructure needed for such development.