ONGC, GAIL restrained from going ahead with coal bed methane project in TN

The southern bench of the National Green Tribunal has granted an interim injunction restraining ONGC and GAIL from going ahead with its coal bed methane project in Thanjavur and Thiruvarur districts of Tamil Nadu. 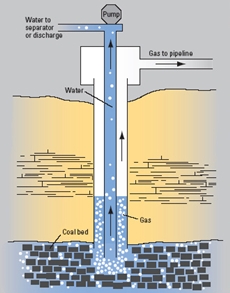 ONGC had initiated a coal bed methane (CBM) exploration and production project on the Cauvery river in Thanjavur and Thiruvarur districts allegedly without proper clearances from the central and state authorities.

The state government constituted a multi-disciplinary committee to study the adverse impact of the project on Cauvery delta, which is regarded as the state's rice bowl and the government.

The state government had warned that if the exploration activities even marginally harmed the rice fields, it would not allow the project.

After a gas leakage in 2014, which was followed by protest from people, the state and the union government cancelled the licence to ONGC in July 2014.

The commission, however, suddenly restarted the project "in a clandestine manner" without obtaining prior approval from the authorities in July 2015.

ONGC along with the state-owned natural gas processing and distribution company GAIL were attempting to exploit the natural resources like crude oil, natural gas and methane without following the mandatory requirements. This would result in environmental degradation and loss of precious mineral resources.

The counsel for the state government M R Gokul Krishnan appeared before the second bench of the judicial member of the tribunal Justice P Jyothimani and expert member R Nagendran.

Issuing notice to ONGC and GAIL, the bench granted an interim injunction on the exploration activities till Monday. It also appointed MDMK leader Vaiko as the amicus curiae (a third party well versed in the matter who can assist the court) in the matter.