US oil production and in particular that of shale oil has proven to be an early and nimble responder to the large drop in oil prices that occurred in late 2014, according to a new report by energy experts at Rice University's Baker Institute for Public Policy. 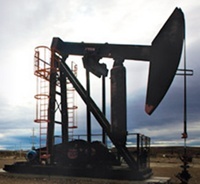 The report, Effects of Low Oil Prices on US Shale Production: OPEC Calls the Tune and Shale Swings, leverages previously unreleased data by international oil and gas intelligence company Drillinginfo and provides an early snapshot of an industry making initial adjustments in response to a new economic environment.

''The Drillinginfo data appear to confirm speculation that some of the first reductions in worldwide oil production would take place in the US shale sector,'' Krane said. ''The shale industry is now revealing itself as a nimble and price-responsive producer. This is a useful characteristic at times like the present, when OPEC member-states have rejected their customary market-balancing role.''

The Baker Institute report's figures show a 32 per cent drop in oil-directed drilling by US companies between May 2014 and January 2015.

Global oil prices shed around half of their value between June and December 2014, falling precipitously after OPEC's 27 November decision to maintain constant oil production. Saudi oil minister Ali al-Naimi declared that OPEC would defend its share of global crude oil markets from upstart producers, including US shale operators.

Two months later, OPEC's actions appeared to be generating the desired effect, the report found. New oil production in some US shale plays appears to have been curtailed, especially since November. Signs include shrinking numbers of drilling rigs in operation, fewer wells being drilled and reductions in the volume of new oil production coming on stream.

''US shale oil is a high-cost resource, with an advantage that lies in low costs of entry and exit. Companies can get wells drilled and new production ramped up in a matter of weeks,'' Krane said. ''When the oil price falls, if some companies stop drilling, shale's fast decline rates begin to reduce supply automatically.''

The clearest evidence of decline has emerged from the Permian Basin of Texas and New Mexico, according to the report. There were steep drop-offs in the number of rigs in operation and in the drilling of vertical wells. As a result, oil flow, especially from vertically drilled wells, has decreased.

Krane said the picture is far from universal, however, and important counter-cases bear mention.

Perhaps, the most contrarian is South Texas' Eagle Ford shale, where Drillinginfo data shows rising numbers of wells drilled and an increasing volume of oil produced, even between the months of November 2014 and January 2015.

''Although the actual changes in output are modest, the implications are not,'' Krane said. ''The swing producer role held by Saudi Arabia since the mid-1970s appears to be in flux. At times when the Saudis decline to adjust production in line with market signals, that role may revert to higher-cost areas of production, including some in the United States. In fact, the swing producer role was once an American concern overseen by the Texas Railroad Commission, which, until the rise of OPEC, maintained similar production quotas aimed at reducing oil-price volatility.''

This time, the market response is not orchestrated by a governing body but by the decentralised actions of many firms responding to price signals, Krane said. ''In the case of shale, unique characteristics allow this to happen. These include higher costs, short lead times for investment, low barriers to entry and exit, steep production decline curves and requirements for continuous drilling to maintain constant production,'' he said.

Shale's price responsiveness bodes well for big conventional oil producers and projects, including those outside North America, which cannot respond as quickly due to lengthy investment-to-production timelines, Krane said. ''Shale's short-term investment characteristics might also help reduce the duration of the current oil bust, in contrast with the nearly two decades of low oil prices between the mid-1980s and early 2000s, which were exacerbated by the onset of huge projects in Alaska, the North Sea and the Gulf of Mexico that were not as responsive to oil prices,'' he said.

''If OPEC and Saudi Arabia shift away from their prior swing producer roles, the nimble characteristics of US shale producers may provide global markets with alternate and useful source of spare capacity,'' he said.