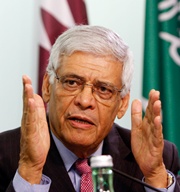 Crude oil prices could climb to unseen levels of $200 a barrel if producers fail to invest in additional supplies, secretary-general of the Organization of Petroleum Exporting Countries (Opec) Abdalla El-Badri said on Tuesday even as the price of Opec basket of twelve crudes fell to $42.90 a barrel on Monday, compared with $43.69 the previous Friday.

''If you don't invest in oil and gas, you will see more than $200,'' El-Badri said in an interview in London on Monday.

Brent crude for March, however, settled 0.3 per cent higher at $48.95 a barrel on the ICE Futures Europe exchange in London.

US benchmark West Texas Intermediate erased some of the losses and climbed as much as 2.7 per cent following his comments

Crude prices have tumbled 46 per cent in 2014 as most Opec members, including kingpin Saudi Arabia, decided to keep output intact despite a supply glut caused in part by surging US shale oil production.

The Paris-based International Energy Agency said on 21 January that a decline in prices may deter investment in all types of energy.

While falling investments due to the current price collapse may cause a drying up of fresh supplies for a few years and rig up oil prices, analysts said prices are unlikely to touch $200 levels as ''a move back above $100 will make shale oil extraction profitable.

El-Badri said there's an oversupply of about 1.5 million barrels a day on the oil market and Opec is open to a meeting with nations outside the 12-member group to tackle the glut.

The market will be brought back into balance by a reduction in supply, rather than an increase in demand, he said.

Investment in oil production will fall by $100 billion, or 15 per cent, this year compared with 2014, Fatih Birol, chief economist at the IEA, said at the World Economic Forum in Davos, Switzerland on 21 January. This means oil at $45 a barrel will be a temporary phenomenon, he said.

Drilling rigs US crude production rose to 9.19 million barrels a day on 9 January, the fastest pace in at least three decades, according to the Energy Information Administration, the US Energy Department's statistical arm.