New York state yesterday moved to ban fracking across the state, over environmental and health concerns. 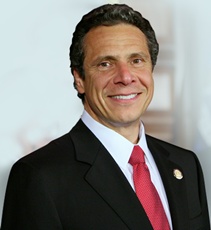 The move came after governor Andrew Cuomo's environmental commissioner, Joe Martens recommended a ban in Albany, the state capital, during a cabinet-level meeting.

According to Cuomo, a Democrat, he would defer to Martens and acting health commissioner Howard Zucker in making a final decision.

The ban would spell the end of the state's current six-month moratorium.

In the fracking process, pressurised water, sand and chemicals are shot to split rock formations to release natural gas and so-called tight oil.

The technique, now in wide use, had led to a surge in domestic-energy production and had also created millions of new jobs.

The state and local governments, though are pushing for bans over health and environmental concerns, including the potential for earthquakes and the contamination of natural water supplies.

The Marcellus shale formation runs underground through New York extending 600 miles along the Appalachian Basin and is rich in natural gas deposits.

The state's plan was immediately opposed by supporters of fracking.

According to Karen Moreau, of the New York Petroleum Council, an arm of the American Petroleum Institute, which represents some of the world's biggest energy companies, the action by governor Cuomo showed that New York families, teachers, roads and good-paying jobs had lost out to political gamesmanship.

Meanwhile, nydailynew.com reported that acting state health commissioner Howard Zucker, in a long-awaited report, informed Cuomo that there were too many potential health risks and other ''red flags'' for the drilling to proceed.

He cited concerns that fracking could pollute the water, air and soil, and declared that on the basis of research and reports he had seen, he would not let his family live in a community that had fracking.

He added, he considered the people of the state of New York as his patients. He said, the state could not afford to make a mistake. The potential risks were too great, he added.