Russian President Vladimir Putin yesterday presided over the commencement of construction of a pipeline which would ship 38 billion cubic metres (bcm) a year of Russian gas to China, from 2019, Reuters reported. 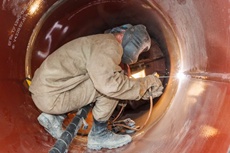 The 4,000 km Gazprom ''Power of Siberia'' pipeline forms a key element of the Kremlin's energy strategy, as Russia attempts to shift reliance away from European markets that accounted for the bulk of state-controlled Gazprom's exports.

Putin told a Chinese delegation and a group of Gazprom workers that Russia, along with its "Chinese friends" was starting the biggest construction project in the world.

He added, there would be nothing similar in the world in the area of energy construction in the near future.

He added the first gas pipeline between Russia and China would not only allow Russia to export gas, but to develop gas infrastructure in the country, to speed up (economic) development, not only in this region, but in the whole country.

Russia had stepped up efforts to strengthen its economic ties with Asia because of the crisis in Ukraine, which had brought East-West relations to their lowest level since the Cold War.

According to Zhang, the East Route of China-Russia natural gas pipeline was the second major on-land energy transport passage between China and Russia. It was a new, important tie of friendship and cooperation between the two countries and also a great fruit of the new- era development of China-Russia relations.

The Chinese vice premier added the construction and operation of the pipeline would provide secure and reliable clean energy for China's economic development and a long-term stable market for the rich natural gas resources in Russia. The pipeline was also of great significance for the rejuvenation of the traditional industrial base in northeast China and Russia's development of the Far East.

Zhang added that China was ready to work with Russia to implement the project which was of great strategic significance in a comprehensive way so as to bring the benefits to the peoples of the two countries and generations to come.