US oil and gas company Apache Corp has said that it has made its first oil discovery in Australia's Canning basin, off the western coast, which could turn out to be the country's biggest find in decades. 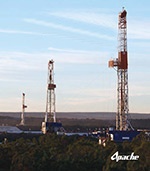 Drilling of oil well Phoenix South-1 has confirmed at least four discrete oil columns ranging in thickness between 26 to 46 metres at a depth of 4,160-4,500 metres. Apache said in a statement.

Analysis of six light oil samples has indicated a productive oil reservoir with preliminary estimates of about 300 million barrels of oil in place.

Apache is the operator of the permit WA-435-P as well as its adjacent WA-437-P permit with a 40-per cent interest. Other partners in the venture include Perth-based Carnarvon Petroleum and Finder Exploration holding 20-per cent stake each and Japanese petroleum company JX Nippon Oil also with a 20-per cent interest.

Additionally, Apache has exercised its option of acquiring a 40-per cent ownership and operatorship of two adjacent permits WA-436-P and WA-438-P.  The four permits combined cover a total area of approximately 20,000 sq.km.

Thomas Voytovich, Apache's executive vice president and chief operating officer said, ''Although evaluation is at an early stage, Phoenix South-1 is an exciting result. The oil and reservoir quality we have seen point to a commercial discovery.''

''If these results are borne out by further appraisal drilling, Phoenix South may represent a new oil province for Australia. We look forward to working with our partners to continue evaluation of the area,'' he further stated.

Carnarvon Petroleum portrayed the discovery as ''one of the most significant developments in Australian oil and gas in recent times.''

The company's managing director Adrian Cook said it was the most significant new oil play in the northwest shelf since the Enfield discovery opened up the Exmouth basin almost 20 years ago.

''The implications on the rest of our acreage are still being assessed but the potential is extraordinary,'' Cook said.

Carnarvon said that Apache and JX Nippon have formally notified Carnarvon that they are committed to drilling the Roc prospect which is a follow-up of Phoenix-South-1 exploration well.