Oklahama has been experiencing earthquakes due to four wells forcing huge amounts of drilling waste-water into the ground, a new study suggests. 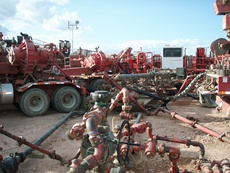 The wells seemed to have triggered over 100 small-to-medium earthquakes in the past five years, a study published on Thursday by scietific journal Science sought to explain, with many of the quakes much farther away from the wells than expected.

Between them, the wells poured over 5 million gallons of water a mile or two underground into rock formations every day the study revealed.

According to study lead author Cornell University seismologist Katie Keranen, that buildup of fluid created more pressure that "has to go somewhere."

Researchers had earlier thought the water diffused through underground rocks slowly, but it was moving faster and farther and triggered quake fault lines that already were likely ready to move, she said.

She added one really did not need to raise the pressure a great deal.

The study showed how the pressure could trigger fault lines -- which already existed but were not too active. The researchers needed more detail on the liquid injections themselves to absolutely prove the case, according to Keranen.

The study echoes previous research, which showed hydraulic fracturing for gas could not be directly linked to increased seismic activity, The Washington Post reported. But the injection of waste-water from drilling at disposal sites created fluid pressure below the surface that could trigger earthquakes of magnitude 3 or higher, according to Keranen.

The research underscored earlier findings by the US Geological Survey and agencies that studied seismic activity in several states.

According to Austin A Holland, a research seismologist for the Oklahama Geological Survey, it stood to ''help improve the scientific discussion and understanding of what's occurring in Oklahoma.''

State geologists had suspended or halted waste-water injection in several states, including Colorado and Ohio, after areas near wells were rocked by earthquakes.

According to the Oklahoma Geological Survey, Oklahoma County, near a fault line that runs through the centre of the state, which had recorded only six earthquakes over eight years starting in 2000, recorded 31 quakes in 2009 and 850 in the following 15 months.

Hydraulic fracturing, known as fracking, a controversial process, uses high-pressure blasts of water mixed with a chemical cocktail that are injected into wells to fracture rock and unlock trapped natural gas.