Shares of Reliance Industries and state-run Oil and Natural Gas Corporation (ONGC) tanked in the morning trade today after the Election Commission asked the central government to defer its decision to double the price of domestically-produced natural gas to $8.4 per million British thermal units (mmBtu) from the existing $4.2 per mmBtu. 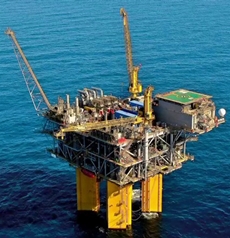 The government had cleared a proposal to increase the domestic natural gas price from $4.2 per million British thermal units (mBtu) to $8.4, which was to take effect from the new financial year beginning 1 April.

The Election Commission has directed the central government to put the decision to hike the price of natural gas in cold storage as the election process is on and a new government will be in place by the last week of May.

The EC directive comes a day after Aam Aadmi Party leader Arvind Kejriwal wrote a letter to the Election Commission questioning the necessity of the central government hiking gas prices when RIL itself had earlier stated that the cost of producing a unit of gas is less than $1, which meant that the current price of $4.4 per mmBtu itself is way above the real cost of production.

RIL has been rejecting AAP's allegations, saying that gas fields aren't commercially viable at current prices.  It has also denied that it is producing gas at less than $1 per mmBtu.

According to RIL, the biggest beneficiary of hike in rates would be state-run ONGC as RIL currently accounts for a fraction of the country's gas output.

Also, according to RIL, the impact on power tariffs would not be high because gas-fired plants account for barely 5 per cent of the electricity generated in India.

Although RIL refutes any correlation between gas price hike and inflation, it cannot deny the fact an increase in the rate would cost gas consumer more.

In directing a deferment of gas price hike, the EC said it had considered all relevant facts, including the fact that the issue was before the country's apex court.

There were widespread allegations that the gas price hike was specifically intended to benefit Reliance Industries.

Petroleum minister Veerappa Moily justified the government's decision to hike gas price saying that he had done his duty as oil minister and that the gas price revision was aimed at boosting exploration and production activity and making the sector more attractive to foreign investors.

Kejriwal said his party was the only one that had raised the issue with the poll watchdog. "It's a victory for the people," he said.