India's three main fuel retailers – all of them state-owned – are likely to incur a staggering Rs1,78,491 crore loss of revenue by the end of the fiscal year by selling diesel and cooking gas below cost. This is despite last week's Rs5 per litre hike in diesel prices, according to a report. 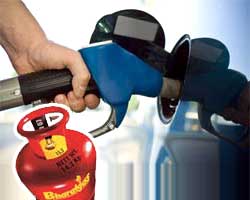 On 13 September, the government decided to raise the diesel price by Rs3.50 per litre. It also hiked excise duty on the fuel by Rs1.50 to take the total increase in rates to Rs 5 per litre. After including local sales tax, the hike in Delhi came to Rs 5.63 per litre.

While this was the steepest ever one-time increase, it cut the losses on sale of fuel only by Rs3.50, says PTI citing industry sources.

The oil companies were losing Rs17.05 per litre on the day of the increase. After taking into account marginal appreciation in rupee value, they now are losing Rs13.86 per litre, the sources said.

Besides diesel, oil marketers currently lose Rs32.70 per litre on the sale of kerosene through the public distribution system (PDS) and another Rs347 per 14.2-kg domestic LPG cylinder.

The sources said the oil companies are losing about Rs485 crore per day on sale of diesel, LPG and kerosene below cost. Of this, loss on diesel alone is Rs300 crore a day.