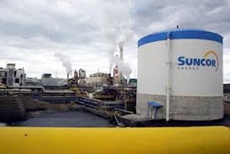 The joint ventures include Fort Hills and Joslyn oil sands mining projects, and restarting the construction of Suncor's Voyageur bitumen upgrader near Fort McMurray in Alberta. Suncor will receive a total cash payment of C$1.75 billion for the deals.

Under the terms of the agreements, Total will acquire a 49-per cent interest in Suncor's planned third upgrader, which has a projected capacity of 200,000 bpd.

Besides, Total will increase its stake in the Fort Hills oil sands project to 39.2 per cent from the current 20 per cent by acquiring additional stake from Suncor. Further to the transaction, Suncor will hold 40.8 per cent in the project with the remaining 20 per cent held by Teck Resources Ltd.

In return, Suncor agreed to buy a 36.75-per cent interest from Total's 75-per cent stake in Joslyn joint venture. On completion of the deal, Total will have 38.25-per cent stake, with Occidental Petroleum holding 15 per cent and the balance 10 per cent held by Inpex Canada Ltd.

Suncor president and chief executive officer Rick George said: "The agreement with Total is an important element of Suncor's plans to more than double our oil sands production."