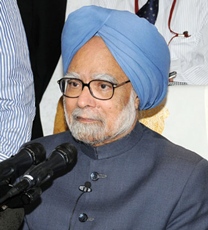 Prime minister Manmohan Singh today said diesel prices too would be freed from government control as part of "much-needed reforms", although LPG and kerosene prices would continue to be subsidised.

He also rejected the opposition criticism last week of the government's decision to peg petrol prices to the market and hike the prices of other petroleum fuels.

Aboard Air India One, on his way back from Toronto, after the G-20 Summit, the prime minister told journalists that given the fact that petrol prices had been set free, the same consideration would extend to diesel prices. He said these were much needed reforms.

On 25 June, the government decontrolled petrol prices, which saw a Rs3.50 a litre increase in rates in Delhi and a Rs2 a litre rise in diesel prices, ahead of an eventual decontrol. Diesel prices are expected to rise by another Rs1.50 if freed from government control, according to analysts.

While he gave no time frame for the decontrol of diesel prices, he said the prices of domestic cooking gas, LPG and kerosene would continue to be regulated by the government.
In a move to cut the government's subsidy bill, domestic LPG prices were increased by Rs35 per cylinder and kerosene rates by Rs3 per litre, the first hike in the poor man's cooking fuel in more than 8 years.

Both kerosene and LPG would continue to be sold below cost even after the hike. Kerosene is being sold at Rs15.07 a litre below cost while a 14.2 kg LPG cylinder is being subsidised to the extent of Rs226.90.