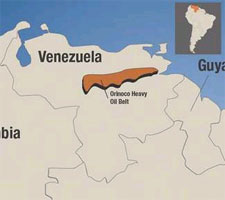 Last month, ONGC had won a joint bid to develop the crude oil block in Venezuela's Orinoco Belt as part of a consortium with Spain's Repsol and Malaysia's Petronas, in which Indian Oil Corp and Oil India Ltd are other minor stakeholders in the block (See: Repsol-ONGC consortium secures big oilfield in Venezuela)

The investment by the public sector explorer could potentially yield 5.5 million tonnes of year of crude at peak production level.

Earlier ONGC's proposal for 40-per cent stake acquisition in the Carabobo-1 block, through a consortium (including both Indian and overseas partners) had been cleared by a group of secretaries.

ONGC's foreign arm OVL will take an 11-per cent stake in the Venezuelan field, while IOC and OIL would each pick up a 3.5 per cent stake according to P Chidambaram. He was speaking to reporters after the CCEA meeting.

The other members of the consortium, Repsol YPF and Petroleum National Bdh will take an 11-per cent stake each in the block. The remaining 60 per cent will be retained by Venezuela's state oil company Petroleos de Venezuela SA.