Backed by young designers and an array of models the `swadeshi’ fabric symbol Khadi showed up in a trendy avtar at the Lakme Fashion Week Winter/Festive 2018, making the fabric more suitable to modern sensibilities. 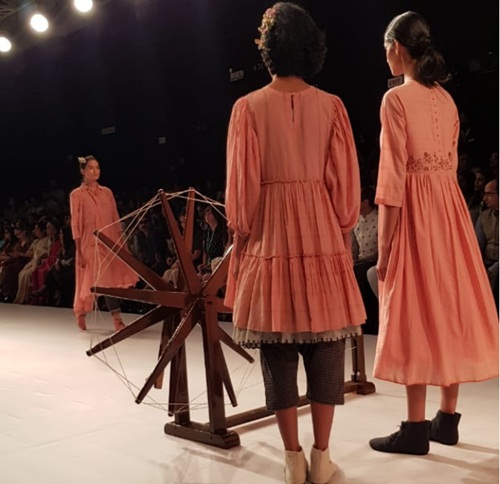 Young designers Lars Andersson, Pallavi Shantam, Saloni Sakaria and Jewellyn Alvares showcased their Khadi range in a show presented by Khadi and Village Industries Commission (KVIC) at the Lakme Fashion Week on 23 August 2018, at the St Regis Hotel in Mumbai.
Andersson, a Swedish designer, who makes clothes from the most grounded parts of the world, says he was motivated to come up with a special range after hearing stories about the distress of weavers.
“Khadi is not a mere coarse fabric; rather it was this versatile signature fabric – for which foreign traders used to give equal weight of gold to purchase it once upon a time and India was better known as ‘Sone ki Chidiya  (The Golden Bird).”, said Khadi and Village Industries Commission (KVIC) chairman Vinai Kumar Saxena.
He was delivering the keynote address on ‘Khadi and Sustainable Development’ at the inaugural session of the 14th edition of the Sustainable Fashion Day at Lakme Fashion Week.
Incidentally, it was also the first occasion that the KVIC had collaborated with Lakme Fashion Week, in which collections made by four designer labels with hand-spun and hand-woven Khadi fabric were exhibited – hand-spun in sleepy cluster areas of Elgandal (Telangana), Kanjarpur (Madhya Pradesh), Bastar (Chhattisgarh), Hoshiarpur (Punjab), Malda, Burdwan and Murshidabad (West Bengal).
Saxena further said that showcasing Khadi at the Lukme Fashion ramp would definitely change the common man’s perception about Khadi being a stereotype fabric made for a particular class. “As Khadi signifies honesty, dedication, sincerity, purity, only human resource, hand-spun and hand-woven, empowering the poorest of the poor and swadeshi, it is the only product in the modern history that has stood the test of time as a vehicle of sustainable development self reliance. In Khadi, we spin employment and weave prosperity in India. Charkha is not a symbol of commercial war, but of commercial peace,” he said.
He thanked Prime Minister Narendra Modi for catching Khadi’s latent potential. Saxena said the prime minister had often called this phase as ‘Khadi for Fashion’ and ‘Khadi for Economic Transformation’.
“Even in the changing times, although the models of development have changed to some extent, sustainability has always been at the core for Khadi. With its diversified canvass, Khadi’s principles of sustainable development reverberate from all directions: from helping terrorism affected families to finding life support to giving economic freedom to tiger attack victim families and from rehabilitating poaching affected communities to self employing displaced people the Narmada valley,” he said.
MORE REPORTS