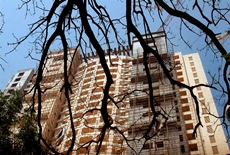 The High Court also ordered an inquiry against politicians, ministers and officers, including the then chief minister Ashok Chavan, who were involved in the Adarsh Housing Society scam.

The high court also gave 12 weeks' time to Maharashtra government to appeal in the Supreme Court against the order.

Though the BJP welcomed the high court ruling, there was no word from the chief minister or any state government functionaries.

The high court had, in December last year, reserved its order on a bunch of petitions in connection with the Adarsh Cooperative Housing Society case.

The Adarsh Housing Society is a 31-storey building constructed on prime real estate in the posh Colaba area in South Mumbai, meant for housing war widows and personnel of the Indian Army.

The high court order comes as a blow to politicians and other influential people who had cornered what was due to the martyrs of Kargil war.

The scam came to light in November 2010, which led to the resignation of the then Maharashtra chief minister Ashok Chavan.

A spate of petitions were filed in the Bombay High Court seeking CBI monitoring of this investigation.

CBI had approached the governor seeking sanction to prosecute Chavan in connection with the Adarsh Housing Society corruption case in late January, following "fresh evidence" against Chavan in the case.

The CBI had filed charges against Chavan under section 197 of CrPC, for offences under sections 120-B (conspiracy) and 420 (cheating) of IPC in the Adarsh Cooperative Housing Society case.

In December 2013, the then governor K Sankaranarayan had refused CBI sanction to prosecute Chavan in the Adarsh housing scam, forcing closure of proceedings against the former chief minister.

Chavan, who had to resign as chief minister after the scam surfaced in 2010, was among the 12 persons who were charged by the agency in connection with the case.

According to the CBI, Chavan had suggested inclusion of civilian members in Adarsh Housing Society meant for war veterans and widows of defence personnel, in order to secure flats for his relatives.

CBI had first approached a trial court and later the high court seeking to drop Chavan's name as an accused, but both of them had refused.

The high court also dismissed CBI's application last November observing that although the governor had refused sanction for prosecution under charges of conspiracy under the Indian Penal Code, Chavan could still be prosecuted under the Prevention of Corruption Act.

Chavan, said the move was a politically motivated. "This is clear political vendetta of the BJP government against me," the former CM had said.