The face of Asia's largest slum, Dharavi, will soon change for the better, after the  state government finalised a Rs10,000-crore redevelopment project to provide clean and hygienic living conditions for its around 59,000 households and 3.5 lakh inhabitants. 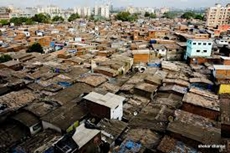 Under the redevelopment plan, the 59,000 dwellings will be provided with alternative built-up living spaces of 350 sq.ft each, of which, 50 sq.ft will be part of a fungible floor space index.

The revamped project offers larger tenements of 350 sq ft against the earlier proposed 300 sq ft for each resident.

The state government on Wednesday decided to float global tenders for the redevelopment of the four major sectors in Dharavi after chief minister Devendra Fadnavis issued in instructions for speeding up the project.

"While floating the global tenders, the consortium would also be allowed so that speedy redevelopment takes place. There would be separate tenders for redevelopment of each of the four sectors," state minister for housing development Ravindra Waikar said.

"The global tender would be floated and state government expects total worth of each sector for redevelopment to be in the range of around Rs5,000 to Rs7,000. Therefore, the rough estimate will be around Rs24,000 crore," CEO for Dharavi redevelopment project Nirmal Kumar Deshmukh informed.

The project is scheduled to be completed within seven years and experienced bidders will be preferred for redevelopment under the Slum Rehabilitation Authority scheme.

The redevelopment of the slum pocket will give a fillip to the real estate market around its periphery which include areas like Bandra-Kurla Complex, Dadar and Sion.

The Dharavi slum enclave has four sectors where redevelopment is proposed. The sectors are further divided into 89 small clusters.

The Maharashtra housing and area development authority (MHADA) is already carrying out redevelopment of the fifth sector in Dharavi.

However, the state government decided to go for private players through global bidding by floating tenders for the remaining four sectors.

The Rs15,000-crore project, a major poll plank for most parties, has been stalled since 2004 owing to differences over the size of tenements and appointment of project consultants. The tenders were last floated by the government but scrapped in 2011 due to technical reasons.

Meanwhile, reports quoting sources said the chief minister has specifically directed officials to ensure guidelines of the Central Vigilance Commission and the PPP model of the Planning Commission are followed to make the process scandal-free.