''The Ministry, hereby, accords environmental clearance for the project as per provisions of Environmental Impact Assessment Notification, 2006 and its subsequent amendments, subject to strict compliance of terms and conditions,'' the ministry said in a notice posted on its website.

"If in future, is it found that any condition is in violation of Environment (Protection) Act, 1986, legal action shall be initiated against the project proponent," the statement added.

HCC is developing Lavasa through its subsidiary Lavasa Corporation, which has run into trouble of alleged environmental violations, following which the ministry issued a stop notice. This also led to a delay in the company's planned Rs2,000 crore initial public offer.

The construction on nearly 257 housing units that had been stopped can now be completed. However, the court cases for alleged violation of the Environmental Protection Act against the company will continue.

The approval came after Lavasa management fulfilled all the necessary preconditions. The ministry had laid down five pre-conditions, as suggested by the Expert Appraisal Committee (EAC), before granting environment clearance.

The conditions include demarcation of land usage which includes open spaces, diverting 5 percent of its expenses for corporate social responsibility, creation of an environment restoration fund, which in turn will be monitored by a verification and monitoring committee, and a submission by the company that violations would not be repeated.

''The Environment Clearance order is a positive development and comes as a reprieve for all our stakeholders including our investors, the villagers and Lavasa Corporation Ltd. The inordinate delay has led to a huge set back to the project and Lavasa Corporation has a challenging task at hand to bring the project up to speed and to meet our commitments,'' the company said in an e-mailed statement.

''We continue to maintain that the MoEF's notification, over which the entire controversy was based, is not applicable to Lavasa. The decision to enter into a constructive dialogue with MoEF to end the impasse was taken keeping in mind the interests of various stakeholders and the investments made till date,'' the statement said.

''We are committed to developing Lavasa as an economic, social and environmentally sustainable city and we will work closely with MoEF and Government of Maharashtra for a sustainable development within a pre-agreed framework, while creating replicable benchmarks,'' it added.

Earlier, HCC said that it was losing Rs2 crore a day on the project impasse. HCC reported a net loss of Rs40.5 crore for the quarter ended 30 September, impacted by high interest costs and delays in awarding of new projects. The company had reported a net profit of Rs12.13 crore in the same quarter last fiscal. 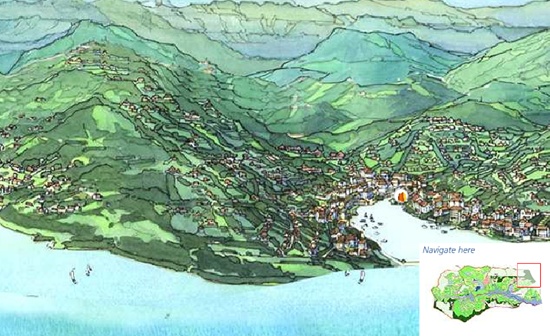 On Friday, the Maharashtra Pollution Control Board (MPCB) had filed criminal proceedings against nine directors and six officials of the Lavasa Corporation in a Pune court for violating environmental laws. (See: Criminal proceedings filed against Lavasa)

The company claimed it had adhered to the laws of the land at all times and will continue to do so in the future.

Lavasa Corporation was also in discussions with its lenders for a one-year moratorium on principal repayment on debt, which was about Rs1,065-1,070 crore.

A consortium of 11 banks led by Union Bank of India had sanctioned Rs1,200 crore in two phases in 2006 and 2008 to Lavasa. (See: Lavasa discusses 1-yr moratorium with lenders)