BHP Billiton to reactivate uranium mine in Western Australia

BHP Billiton, the world's biggest miner, plans to reactivate its Yeelirrie project in the Goldfields of Western Australia to mine uranium, after the newly elected government of the state lifted a six-year ban on uranium mining imposed by the previous labor government led by Geoff Gallo.

The Yeelirrie mine holds nearly 35,000 tonnes of uranium and is the second-biggest undeveloped uranium deposit after ERA's Jabiluka deposit in northern Australia. 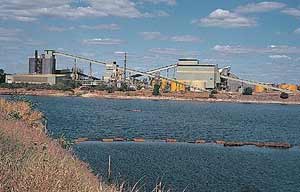 ''It is now open to the mining industry in this state, if they wish to proceed with plans to develop the uranium industry,'' the newly elected premier Colin Barnett said in a statement.

"BHP Billiton is assembling a project team, to be based in Perth, to evaluate mining and processing options and to assess the environmental impact," the miner said in a statement.

BHP, the second biggest uranium producer in Australia, has also another huge mining project, the Olympic Dam operation in South Australia, but it will take another 3-4 years for BHP to get uranium from its Yeelirrie project.