More reports on: In the news, Investments

The Central Bureau of Investigation (CBI) today arrested Karti Chidambaram, son of former finance minister P Chidambaram, in connection with the INX Media case. Karti was arrested at Chennai airport this morning as soon as he got out of his flight back from the UK. 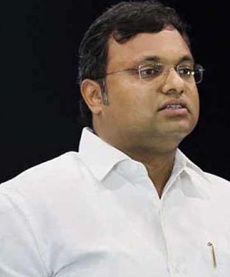 CBI officials said Karti was arrested for not cooperating with investigations in the INX Media money laundering case.

CBI had in May last year filed an FIR against Karti and INX Media among others for alleged irregularities in FIPB approval given to the media house for foreign direct investment (FDI) in 2007. The CBI has alleged that the INX Media's FDI proposal was ''deceitful and fallacious'' but was approved by then finance minister P Chidambaram.

While the FIPB granted permission to INX Media on 30 May 2007 to bring in FDI worth Rs4.62 crore, it rejected the proposal of downstream investment of INX Media in INX News.

The CBI has alleged that INX Media flouted the conditional approval of FIPB and invested over Rs305 crore in the firm against the approved FDI inflow of Rs4.62 crore. The shares were bought at Rs862.31 per share - a premium of 86.2 times the face value of the share, according to sources.

Besides the media firm made a downstream investment of 26 per cent in its subsidiary, INX News.

According to the CBI, when the FIPB sought clarification from INX Media on the investment and the Income Tax Department began its probe on 26 May 2008, the media firm engaged Karti Chidambaram, promoter director of Chess Management Service (P) Ltd, to ''amicably'' resolve the issue by ''influencing the public servants of the FIPB unit of ministry of finance by virtue of his relationship with the then finance minister, P Chidambaram.''

The CBI has alleged that Karti Chidambaram used his influence over certain FIPB officials to extend undue favours to INX Media and abandon all investigations into the case.

FIPB then asked the foreign media firm to apply afresh for the downstream investment already approved by it, the CBI satated, adding that INX Media was later granted FIPB permission for the investment in violation of norms.

The CBI alleged that Karti Chidambaram received cash payment of Rs10 lakh through Advantage Strategic Consulting, ''which was controlled by him (Karti) indirectly''. It also allegedly found invoices for Rs3.5 crore raised companies in which Karti has ''sustainable interest'' and ''where there are common directors'' in favour of INX Media.

In 2008, the media firm launched NewsX, an English news channel. Within a year of launch, the news channel was sold to Indi Media Network, a joint venture between Nai Duniya owner Vinay Chhajlani and Jehangir Pocha.

In March 2009, Peter Mukherjee and his wife Indrani Mukherjee exited the company after selling their 30-per cent stake in the loss-making INX Media. In April 2010, the Hindi GEC of the company was sold to Zee Network for Rs64 crore.

Both Peter and his wife Indrani, founders of INX Media, are accused in the Sheena Bora murder case and are lodged in jail in Mumbai.

After filing the FIR, CBI had conducted raids at premises linked to Karti and the residence of Peter Mukerjea and Indrani Mukerjea among 14 locations spread across Mumbai, Chennai and Delhi NCR in connection with the case.

The ED, which is already investigating a company associated with Karti in connection with the Aircel Maxis deal and FDI inflow into Vasan Healthcare, had found documents related to the INX Media FDI inflow during searches.

The ED had earlier summoned Karti to appear before the agency on March. The CBI and ED have both grilled Karti Chidambaram on multiple occasions.

Earlier this month, the Enforcement Directorate arrested Karti Chidambaram's chartered accountant S Bhaskararaman for not cooperating in the money laundering probe. The agency, however, said Bhaskararaman failed to appear before its investigating team even after several summonses were issued.