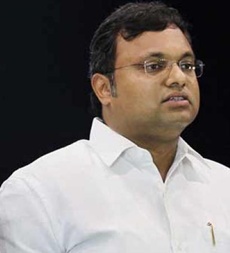 The agency's action invited strong reaction from Chidambaram who questioned the jurisdiction of the agency to investigate a matter related to Prevention of Money Laundering Act, 2000.

"They (ED officials) searched and found nothing but since they had to justify themselves they took papers of a statement made by government in the Parliament, few years back. The ED has no jurisdiction to investigate under PMLA," he said.

The ED had, in May last year, registered a case under the Prevention of Money Laundering Act against Karti and others.

Both Chidambarams, however, deny all the charges made against them.

''There is no FIR concerning a scheduled crime by CBI or any agency. I anticipated they'll search premises in Chennai again but in a comedy of errors they came to Jor Bagh (in Delhi) and officers told me that they thought Karti is an occupant of this house but he is not,'' ANI quoted Chidamabaram as saying.

''They (ED officials) searched and found nothing but since they had to justify themselves they took papers of a statement made by government in the Parliament, few years back. The ED has no jurisdiction to investigate under PMLA,'' Chidambaram said.

The INX Media money laundering case pertains to the Foreign Investment Promotion Board (FIPB) approval granted in 2006 by the then finance minister P Chidambaram.

The ED had lodged an Enforcement Case Information Report against the accused named in the CBI complaint, which included Karti, INX media and its directors, Peter and Indrani Mukerjea, among others.

According to the agency, Karti Chidambaram had received money from INX Media for using his influence to manipulate a tax probe against it over violation of Foreign Investment Promotion Board (FIPB) rules. Karti is alleged to have received investment from Mauritius in return.

The CBI has also recovered vouchers worth Rs10 lakh which were allegedly paid for the services. These vouchers were issued in favour of Advantage Strategic Consulting (P) Limited, a firm ''indirectly'' owned by Karti Chidambaram.

The ED also contended that Mukerjeas had "allegedly siphoned off 90 million pounds and the money is suspected to have gone to foreign countries through hawala routes".

Following the FIPB clearance, the INX Media said it had received foreign direct investment (FDI) of Rs4.62 crore, but actually received Rs305.36 crore between August 2007 and May 2008, the ED said.

Karti and others have been charged with criminal conspiracy, receiving illegal gratification, cheating, influencing public servants and criminal misconduct.