Savoy Hotel, the 'palace by the Thames' that was Britain's first luxury hotel to welcome generations of royals, prime ministers and Hollywood stars, reopens on Sunday after a facelift worth £220 million pounds ($350 million). 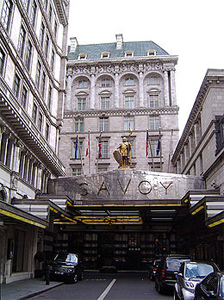 Opened in 1889 by Richard D'Oyly Carte, the Savoy is a hotel of firsts. It was the first hotel in Britain to have electricity, electric lifts (known as "ascending rooms"), air-conditioning, 24-hour room service, private bathrooms, and constant hot and cold running water. This must have been a marvel to anyone accustomed to the two inches of lukewarm brown water, de rigueur in the grand English country house.

With its iconic Art Deco steel and marble entrance, prime riverside location and glamorous history, the Savoy is one of the world's most famous luxury hotels.

Claude Monet stayed for six months while painting views of the river, Frank Sinatra entertained guests at the grand piano and Winston Churchill held wartime meetings in the restaurant.

Marilyn Monroe, Humphrey Bogart, Charlie Chaplin and Coco Chanel have all stayed at the hotel, while Britain's Queen Elizabeth and the late Princess Diana attended functions there.

After the hotel started to show its age in recent years, the Canadian owners, Fairmont Hotels, decided to refurbish it to compete with a host of new luxury rivals opening in the capital.

They removed dangerous asbestos and used tons of steel to shore up a wall of balconies that had been added in a poorly executed extension in 1910. The cost of the refurbishment spiralled from £100 million to £220 million pounds.

A new suite, the biggest and most expensive in the hotel, has been added, covering the front of the entire fifth floor. The vast Royal Suite has a marble foyer, an office, sitting room, dining room, kitchen and two bedrooms. A walk-in wardrobe has an air-conditioned section for shoes.

Nine more suites named after famous guests have touches that evoke their glamorous past. The Marlene Dietrich suite will have 12 pink roses - something the German actress always requested.

A new Art Deco bar, decorated in black, gold and leather, has been built on the original cabaret stage and a glass dome now sits over the tea room. All 268 rooms have been renovated.

The Savoy was ruled with a rod of iron by the world's first famous general manager, Cesar Ritz, and the kitchens run by the first celebrity chef, Auguste Escoffier.

A pioneer in the development of luxury hoteliering, he knew how to entice wealthy customers and quickly gained a reputation for good taste and elegance, Swiss hotelier and founder of several hotels, most famously the Hôtel Ritz in Paris and The Ritz Hotel in London, César Ritz was popularly referred to as "king of hoteliers, and hotelier to kings".

In 1888, he opened a restaurant with Escoffier in Baden-Baden, and the two were then invited to London by Richard D'Oyly Carte to become the first manager and chef of the Savoy Hotel, positions they held from 1889 until 1897

"Emperor of the chefs", as Kaiser Wilhelm II referred to the French chef, restaurateur and culinary writer Escoffier, who was France's pre-eminent chef in the early part of the 20th century and one of the most important leaders in the development of modern French cuisine

In 1897, Ritz and Escoffier were both dismissed from the Savoy Hotel, and shifted their allegiance to the Paris Ritz and then the Carlton Hotel in London, weaning away the high society clientèle from the Savoy.

The Savoy had the first serviced apartments and Sarah Bernhardt moved in; in 1937, King George VI became the first reigning monarch to dine in – shock, horror! – a hotel when he attended a private dinner at The Savoy; his daughter, Princess Elizabeth, was first seen in public with Prince Philip at a wedding reception in the hotel in 1946. Vivien Leigh met her future husband, Laurence Olivier, in The Savoy's lobby.

The miracle that Richard D'Oyly Carte wrought at the turn of the 20th century was to make hotels acceptable to the aristocracy. Once the Prince of Wales (later Edward VII) patronised the joint, even dukes' daughters, unaccustomed as they were, could be seen dining in public for the first time at the hotel.

Over the years, the Savoy became a power house of the upper classes, Hollywood and politics. Winston Churchill often took his entire cabinet to lunch at The Savoy. The Savoy was the equator of planet London, the middle of the urbane world where Westminster, Fleet Street and the City collided and colluded in the Savoy Grill.

Basic character unchanged
Many dreaded the refurbished version would be too glitzy, the owner being Saudi Prince Al-Waleed bin Talal, and the perception of Arab taste being gold taps. Others thought it might end up looking exactly like the Four Seasons George V in Paris, the designer being the same, Pierre-Yves Rochon. Yet others had apprehensions about management by Fairmont, a hotel group more flash than dash.

One dreaded that it would not be The Savoy any more. However, the Savoy is still the Savoy, agree most reports; only better.