Covaxin not for people with medical conditions: Bharat Biotech

Bharat Biotech, the developer of coronavirus vaccine, Covaxin, has advised people with weak immunity and other medical conditions, including allergies, fever or a bleeding disorder to consult a doctor before getting the shot – and if needed avoid a vaccine jab. 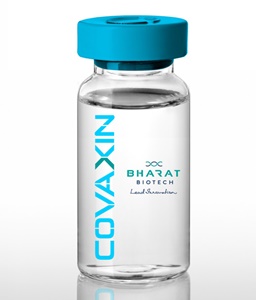 While these precautions apply to most vaccines, Bharat Biotech seems to have taken extra care to ensure that its vaccine candidate is not subjected to unnecessary criticism.
The company on Tuesday said those receiving its Covaxin shots should disclose their medical condition, medicines they are taking and any history of allergies.
In extreme cases of vaccine reactions, Bharat Biotech said there could be manifestation of severe allergy among vaccine recipients, which may include difficulty in breathing, swelling of the face and throat, rapid heartbeat, body rashes, dizziness and weakness.
The directive comes after the government started a nationwide vaccination campaign involving Serum Institute of India’s Covishield and Bharat Biotech’s Covaxin as the mainstay.
On Saturday, AIIMS director Randeep Guleria also received a dose of Bharat Biotech's Covaxin amidst opposition criticism over the status of Covaxin, which, they say, is yet to complete the mandatory Phase III clinical trials.
It may be noted that the government is using Covaxin as a possible supplement to Covishield as it embarked on a massive exercise to inoculate its population against the coronavirus disease (Covid-19) which has claimed more than 1.5 lakh lives in the country.
The vaccination drive that began on 16 January, is using the vaccines - Covishield made by Serum Institute of India (SII) and Covaxin manufactured by Bharat Biotech – but has not reported any serious vaccine-related adverse effects.
Bharat Biotech’s advisory can be seen as a extension of its Phase III clinical trials using Covaxin.
A fact sheet on the vaccine’s clinical trials posted on Bharat Biotech's website, also advises subjects not to take the vaccine if he or she has allergies, fever or bleeding disorder or is on a blood thinner.
It also said that pregnant and breastfeeding women should also avoid taking Covaxin. Those who are immune-compromised or are on medicine that affects immune system, and those who have received another Covid-19 vaccine should also not get the Bharat Biotech's medicine, the company said.
The government has also issued a similar advisory stating who should and who should not get vaccinated against coronavirus
Bharat Biotech said the process of informed consent for participants in clinical trials is covered under Section 2 of the New Drugs and Clinical Trials Rules, 2018. It is a process whereby a potential clinical trial participant is informed by the study team conducting  the clinical trial of all the details of the study prior to participation. The rules clearly lay down the process to be followed for consenting a participant in a clinical trial, including participants who are not able to read/write. The Informed Consent Form must be signed by the trial participant and investigator prior to the subject’s participation in a study. The process to be followed by participants who are illiterate is mentioned in the rules, it added.
The vaccine maker has sought to confirm that the Informed Consent Form, as defined in the study protocol and approved by Institutional Ethics Committee, and the Informed Consent process as defined in the New Drugs and Clinical Trials Rules, 2019, were followed for all participants of the Covaxin Phase III study. These are documented and all copies are with the site, it pointed out.
"Individuals who are prioritised under the public health program of the ministry of health and family welfare, will be covered under this endeavour. Informing the individuals about the offer for vaccination with Covaxin will rest with the respective government program officials. Those offered Covaxin at pre-specified booths will have the options to receive or reject administration of the vaccine," the fact sheet said.
The company document further described the ingredients in the Covaxin. It contains 64g of whole-virion inactivated SARS-CoV-2 antigen (Strain: NIV-2020-770), and the other inactive ingredients such as aluminum hydroxide gel (250 μg), TLR 7/8 agonist (imidazoquinolinone) 15 μg, 2-phenoxyethanol 2.5 mg, and phosphate buffer saline up to 0.5 ml.
"The vaccine thus has been developed by using inactivated/killed virus along with the aforementioned chemicals," said Bharat Biotech.
Covaxin is administered as an injection into the deltoid muscle of the upper arm. It is a two-dose series given four weeks apart, Bharat Biotech further said.
MORE REPORTS