Survival rate for Indian kids with cancer a poor 20%

The survival rate among Indian children suffering from cancer is poor compared to most in Western countries - only 20 per cent of minors survive cancer, as compared to more than 80 per cent in the West, said doctors from Tata Memorial Hospital (TMH) in Mumbai. 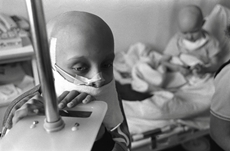 The main reasons for the low survival rate are incorrect diagnosis and treatment, said doctors. The figures were released by the hospital on Tuesday to mark International Childhood Cancer Day today.

''In children, the symptoms of cancer are often missed because they overlap with common illnesses. For example, we need to raise the red flag and suspect cancer if a child has fever for more than two weeks,'' said Dr Sripad Banavali, head of TMH's medical oncology unit.

According to doctors, most paediatric cancers cannot be prevented as they have a strong genetic basis, but some tumours can be picked up early. ''These days a simple sonography can diagnose solid tumours in an unborn child,'' said Dr Banavali.

Paediatric cancers are classified into solid and liquid tumours. Blood cancers, which are known to be aggressive, fall under liquid tumours and constitute 50 per cent of all cancer cases, said doctors.

''Blood cancers are among the worst to treat as they advance very fast. One of the reasons is that in children the blood cells multiply very fast,'' added the doctor

Nearly 30 per cent of children with blood cancers require bone marrow transplant - a procedure in which a patient's blood stem cells are replaced with those from a donor or sometimes their own stem cells.

However, factors such as high cost and unavailability of donors often push patients away from the procedure, he added.

Over the years TMH has become the only centre in the country to achieve a cure rate of 70 per cent for paediatric cancers. In a quest to increase survival rates across the country, doctors are using online portals. ''We are using an online portal called Navya, where patients across India can upload their case history and TMH doctors give opinion on the diagnosis and treatment within 24 hours,'' Dr Banavali said.