The tuberculosis epidemic in India is "larger" than what was previously estimated, the World Health Organisation (WHO) says, adding that the country was one of six nations which accounted for 60 per cent of the new cases in 2015. 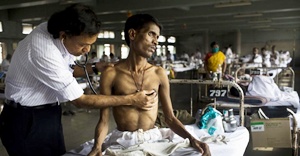 The Global Tuberculosis Report 2016, which was released today, however, said the number of TB deaths and incidences continues to fall globally as well as in India.

"The TB epidemic is larger than previously estimated, reflecting new surveillance and survey data from India. However, the number of TB deaths and the TB incidence rate continue to fall globally and in India," the WHO said.

"Six countries accounted for 60 per cent of the new cases - India, Indonesia, China, Nigeria, Pakistan and South Africa. Global progress depends on major advances in TB prevention and care in these countries," the global health body said in its report.

It said worldwide, the rate of decline in TB incidence remained at only 1.5 per cent from 2014 to 2015 and stressed the need for it to accelerate to a 4.5 per cent annual decline by 2020 to reach the first milestones of the End TB Strategy.

"In 2015, there were an estimated 480,000 new cases of multidrug-resistant TB (MDR-TB) and an additional 100,000 people with rifampicin-resistant TB (RR-TB) who were also newly eligible for MDR-TB treatment.

"India, China and the Russian Federation accounted for 45 per cent of the combined total of 580,000 cases. There were an estimated 1.4 million TB deaths in 2015, and an additional 0.4 million deaths resulting from TB disease among people living with HIV. Although the number of TB deaths fell by 22 per cent between 2000 and 2015, TB remained one of the top 10 causes of death worldwide in 2015," it said.

WHO said that in 2015, 6.1 million new TB cases were notified to national authorities and reported to WHO while notified TB cases increased from 2013 2015, mostly due to a 34 per cent increase in notifications in India. "However, globally there was a 4. 3 million gap between incident and notified cases, with India, Indonesia and Nigeria accounting for almost half of this gap.

''The crisis of MDR-TB detection and treatment continues. In 2015, of the estimated 580,000 people newly eligible for MDR-TB treatment, only 125,000 (20 per cent) were enrolled. Five countries accounted for more than 60 per cent of the gap - India, China, the Russian Federation, Indonesia and Nigeria," it said.

WHO said that the upward revisions to estimates of the burden of TB disease in India for the period 2000 2015 follow accumulating evidence that previous estimates were "too low".

"This evidence includes household surveys, a state-wide TB prevalence survey, studies of anti-TB drug sales in the private sector, notification data and new analysis of mortality data. Since India accounts for more than one quarter of the world's TB cases and deaths, these revisions have had a major impact on global estimates. Estimates for India are considered interim, pending a national TB prevalence survey scheduled for 2017/2018," WHO said.

It said that in the African Region where the burden of HIV-associated TB is highest, 81 per cent of notified TB patients had a documented HIV test result. "The proportion of known HIV-positive TB patients on ART was above 90% in India, Kenya, Malawi, Mozambique, Namibia and Swaziland," it said.

Commenting on the report and the disease in the South East Asian Region which also includes India, WHO Regional Director (SEARO) Poonam Khetrapal Singh said TB remains a serious problem across the region and requires the fullest attention and strongest commitment of governments.

"As outlined in WHO's new global report on TB, a number of countries in the region are among the world's highest TB burden countries, while revised estimates based on increased case-reporting and enhanced surveillance show that the TB caseload is higher than previously projected. TB is the single largest cause of death of any infectious disease in the region, and remains responsible for incalculable suffering, premature mortality, impoverishment and foregone development," she said.

She said though countries have been making efforts to end TB and the number of TB deaths and its incidence rate continues to fall, at the current trend the region would not be able to achieve the SDG targets. "A newer and bolder approach is needed to bend the curve faster and sharper to achieve the global targets. This means intensifying measures to ensure early diagnosis and treatment, such as active case-finding and enhancing access to cutting-edge diagnostic tools. Adopting newer approaches of case diagnosis, community based treatment and treatment of latent infection. It means integrating TB programmes with existing health systems, thereby amplifying the effect these interventions have," she said.

Singh also said that funds must be allocated accordingly, while political commitment must be fortified and both must occur at national and international levels.