India accounted for a third of all maternal deaths in 2015: report

One-third of the total maternal deaths in 2015 happened in India, where 45,000 mothers died during pregnancy or childbirth while Nigeria reported the maximum maternal death of 58,000, says a report in the journal Lancet. 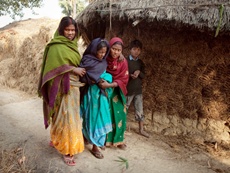 The latest Lancet series on maternal health reveals that the past quarter century has delivered progress for some women and their newborn babies. Maternal deaths globally have fallen by nearly half (44 per cent) since 1990, and use of maternity services has increased markedly.

At the same time, nearly one quarter of babies worldwide are still delivered in the absence of a skilled birth attendant and the Millennium Development Goal (MDG) for maternal health fell far short of achievement, says the report.

Some countries and groups of women saw little or no progress, despite significant global political attention on maternal health. In sub-Saharan Africa, a woman's lifetime risk of dying in pregnancy or childbirth remains an appalling 1 in 36 compared with 1 in 4,900 in high income countries.

The Lancet Maternal Health Series shows light on the causes, trends, and prospects for maternal health in the current era of rapid demographic, epidemiological, and socioeconomic transition. It analyses experiences of the past 25 years, and exposes the growing threat to progress caused by poor quality care and inequity of access.

Since 1990, the gap between the group of countries with the highest level of maternal mortality and the group with the lowest has doubled in size, says the report.

''With 210 million women becoming pregnant and the delivery of 140 million newborn babies each year, it is urgent to improve the quality of care and reduce disparities in access, so securing future economic and social development and supporting the vision of the 2030 Sustainable Development Goals (SDGs) and the Global Strategy for Women's, Children's, and Adolescents' Health.''

The report cites a growing risk of over-medicalisation of normal pregnancy and birth, with the routine use of interventions unsupported by evidence in high- and middle-income countries, and in betteroff groups in low-income countries.

Facility-based births continue to rise, but maternity care that is too much, too soon may cause harm, raise health costs, and contribute to a culture of disrespect and abuse.

At the same time, poor quality care that is too little, too late jeopardises the health of women and their newborn babies, whether in sparsely-populated rural areas, dense urban centres, or in settings marked by environmental or political fragility. Furthermore, despite the increases in maternity care coverage in the past 25 years, an estimated quarter of pregnant women still do not access skilled care at birth.

Opportunities for future progress in improving quality of care and reducing inequities lie not only in wider adoption of effective maternal health interventions and models of care, but also in broader developments. These include the increasing fiscal space for health investments in low- and middle-income countries, urbanisation, Universal Health Coverage, and promising new approaches for expanding the reach and effectiveness of care through behavioural economics, mHealth, and the data revolution.

There are also challenges on the horizon that can impede or reverse progress, including a diluted focus on maternal health, weak global and national governance, and natural and human-made crises, such as climate change, disease outbreaks, conflict, and mass migration.

The Series concludes with a five-point agenda for change: good quality care for every woman, every newborn, everywhere; equity through Universal Health Coverage; health system resilience, strength and responsiveness; sustainable financing for maternal and newborn health; and better evidence, advocacy, and accountability for progress.

Epidemiological: Low- and middle-income countries are following patterns in high-income countries, with increasing incidence of diabetes, heart disease, hypertension, and other chronic conditions. As direct causes of maternal mortality decline, indirect causes of maternal mortality and morbidity are becoming more prominent, including those related to mental health.

Socioeconomic: As individuals and communities become more prosperous, many lifestyle and behavioural changes occur. This includes older ages of women at first birth; increased obesity and noncommunicable diseases; and greater aspiration to use formal-sector health services and technologies, and receive woman-centred care.

Environmental: The impact of climate change, environmental degradation, and natural disasters on human health are population-wide, but it is often women who are most affected by these shifts and shocks. For example, women may need to spend more time collecting fuel and water and so have less time to seek care for themselves and their children. Women also face additional risks in pregnancy from vector-borne or hygiene-related infections, such as malaria, Zika, cholera or Ebola.

For women using services, some receive excellent care but too many experience one of two extremes: too little, too late, where women receive care that is not timely or sufficient, and too much, too soon, marked by over-medicalisation and excessive use of unnecessary interventions. Both extremes represent maternal health care that is not grounded in evidence. And other women receive no care at all.

A growing number of low- and middle-income countries now straddle the two extremes of maternal health care, with too little, too late care among the most vulnerable, and too much, too soon care among the wealthy and those in private care. Indeed, access to evidence-based care remains inadequate across all settings.

It is no longer acceptable to merely encourage women to give birth in health facilities, many of which continue to lack emergency obstetric care, reliable water supply, and even the most basic capability to manage uncomplicated deliveries and provide respectful evidence-based routine care.