The pandemic swine flu that is spreading like wildfire has claimed the lives of over 624 people across India with 300 people dying of swine flu in February 2015 alone. The deadly swine flu virus, called H1N1, had caused the death of 218 people in the country in 2014. 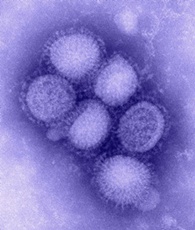 Reports, meanwhile, said around 38 swine flu deaths were reported in one day (Monday, 16 February) while the combined toll has more than doubled compared to the previous year.

In Maharashtra, with 20 people across the state succumbing to swine flu in less than 24 hours, the toll has now climbed to a new high of 78.

While three people died within six hours in Nagpur, the worst-affected district in the state, two more deaths were reported today, plunging hospitals in an emergency mode as authorities struggle to contain the spread of the infection. The total death roll in Nagpur has now exceeded 30, while 135 persons are undergoing treatment in hospitals.

The total number of suspected swine flu cases in the second week of February alone has exceeded 300 - a rise in nearly 100 in a little more than a day.

The death toll in Rajasthan and Gujarat, the two worst affected states, stood at 176 and 150, respectively, as of 16 February.

Across the country, the number of people affected by the deadly H1N1 virus so far stood at 9,311, more than in the past few years.

Added to the problem is the unavailability of medicines for treatment of the disease and the country's drug authority has asked chemists to stock Tamiflu drug but not sell it without prescription.

Union health minister J P Nadda on Tuesday reviewed the drug shortage for swine flu patients. He held a high-level meeting in which a committee was formed to visit hospitals and look into the drug shortage.

Swine flu, an airborne disease, mostly affects people who fail to follow proper hygiene, especially in crowded places. According to observations, there are specific groups of people who are at high risk of getting infected. These include: Individuals having any other respiratory condition like pneumonia; pregnant women; people suffering from chronic diseases like heart disease and diabetes; people more than 65 years of age and children younger than 2 years.

Doctors and health specialists say the virus is constantly evolving, which makes the disease particularly dangerous. Because of its constantly evolving nature it is tough to acquire immunity against it. Also, it is very seasonal and keeps on changing depending on various factors.