The key to putting an end to the obesity epidemic in Australia may lie in preventing the food industry from using subtle strategies that encourage more buying and overeating, so say health experts. Australia has one of the most overweight populations in the world, with more than 60 per cent of adults and one in four children overweight or obese. 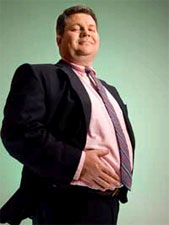 In an article published in the Medical Journal of Australia, Bebe Loff and Brad Crammond, academics at Monash University's Michael Kirby Centre for Public Health, say widespread changes are needed to modify consumer behaviour if Australia is to trim down.

Their wish list includes a slew of other measures - higher taxes on junk foods, subsidies on fruit and vegetables, kilojoule and packaging requirements for foods so they don't have to be purchased in bulk and caps on the number of fast-food outlets that would be allowed in areas. They also want the government to put an end to subsidies to the food processing industry.

The duo also calls for a ban on marketing of junk food, instead of legislation, to curb the menace if Australia wants to tackle obesity in children. In this regard they point out that the ban on food advertising directed towards children in Sweden, in force since 1991, has not helped reduce obesity rates.

They point out that prohibition of one form of advertising would simply ensure the industry would come out with new strategies.

''To produce a detectable impact it is necessary to have a blanket prohibition on direct or incidental marketing  This must include a ban on oversized street signage and billboards; attribution of corporate philanthropy; television, radio, internet, mobile phone messages, newspaper and magazine advertising; as well as advertising through other existing and emerging technologies,'' they write.