Andy Rubin, who created of the Android software powering smartphones around the world, is turning to the hardware market with a handset that will tackle the clutter, complexity and rapid obsolescence of current devices. 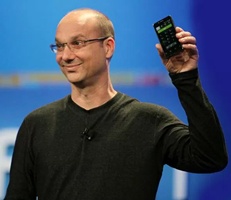 Rubin said in an online post that he will introduce a high-quality phone called Essential that will feature accessories such as a 360-degree camera that can be attached magnetically.

"For all the good Android has done to help bring technology to nearly everyone, it has also helped create this weird new world where people are forced to fight with the very technology that was supposed to simplify their lives," he said.

The Essential smartphones will first debut in the US, where they can be booked at the website www.essential.com for $699 and the 360-degree camera can be ordered for an additional $50.

According to Rubin, Essential phones, which are powered by Android software, will start shipping in about 30 days.

Rubin said he created the company behind Essential to use "21st-century methods to build products for the way people want to live in the 21st century."

Under the mission, people will be able to decide what features they wanted on phones, keeping products simple, using premium materials and enabling devices to evolve so they did not "become outdated every year."

Rubin announced at the Code Conference 2017, Rubin that the Essential PH1 aka Essential Phone will start shipping later this month.

Besides the availability details, Rubin revealed that the Essential Phone had top-of-the-line hardware, and will include a new AI and will be open to include third party AIs such as Google Assistant and Microsoft's Cortana in the near future.

Elaborating on the Ambient OS, Rubin revealed that Ambient OS will also be an open source. According to commentators, the open source strategy had paid off for Android in a big way.