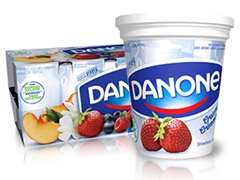 In order to get US regulatory approval, Danone has agreed to sell its US organic yoghurt business Stonyfield Farms, the US Justice Department (DoJ) yesterday said in a statement.

The DoJ said that, ''without the divestiture, the proposed acquisition likely would reduce competition between the two leading participants and top brands in the markets for raw and fluid organic milk, potentially harming dairy farmers in the northeast and US consumers of fluid organic milk.''

The DoJ had filed a civil antitrust lawsuit to block the proposed transaction, but also filed a proposed settlement that, if approved by the court, would resolve its competitive concerns.

The DoJ said that the acquisition could hurt both organic milk sellers and buyers in the northeastern US because WhiteWave and longtime Danone partner CROPP Cooperative are the top purchasers of raw organic milk in the country.

''The proposed acquisition would have blunted competition between the top two purchasers of raw organic milk in the northeast and the producers of the three leading brands of organic milk in the United States,'' said acting assistant attorney general, Brent Snyder of the Justice Department's Antitrust Division.

Under the terms of the proposed settlement, Danone must divest its Stonyfield Farms business to an independent buyer approved by the US.  The DoJ said that the divestiture will sever Danone's and CROPP's strategic partnership thereby eliminating the entanglements between CROPP and the merged firm.

Founded by Samuel Kaymen in 1983, Stonyfield, is an organic yogurt maker. The New Hampshire-based company makes the number-one selling brand of organic yogurt and the number-three overall yogurt brand in the US.

It owns brands including YoBaby, YoToddler, YoKids and Oikos, and licenses its brand name to Organic Valley for its fluid milk.

In 2001, Danone purchased an initial 40 per cent in Stonyfield and later increased its stake to 85 per cent.