Taco Bell said it would stop serving kids' meals and toys, over "marketing concerns rather than unit economics" in the words of its CEO Greg Creed . 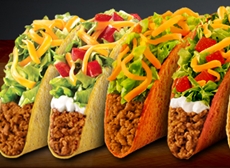 According to the chain, it would start removing the options this month at select restaurants, and serve its last kid's meal in January 2014. The company has traditionally gone after younger men who were looking to load up on cheap fast-food.

The Huffington Post reported: "The royal baby will never eat a Taco Bell kids' meal. Exactly one minute after the Duchess of Cambridge gave birth to her 8 pound, 6 ounce prince, Taco Bell, the world's largest chain of Mexican fast food restaurants, announced that it would be discontinuing its line of kids' meals for good. The chain will serve its last kid's meal by January 2014, long before the infant third in line to the British throne is likely to begin eating solid food."

''As we continue our journey of being a better, more relevant Taco Bell, kid's meals and toys simply no longer make sense for us to put resources behind,'' said Creed. ''What does make sense is concentrating on expanding choices that meet and exceed the diverse needs of consumers of all ages, without losing focus on what makes us great today.''

Taco Bell will continue to focus on new menu options that provide a broad range of choices and define the brand, such as the Doritos Locos Tacos, the Cantina Bell Menu as well as offering more balanced menu items.

According to the company, it was 2 cents ahead of profit estimates but missed on revenue, coming in at $2.90 billion.

"Pioneering this change on our menu is a bold move for our industry, and it makes sense for Taco Bell," Creed said in a statement.

The company also noted that kids' meals also did not fit its strategy and had had an "insignificant" impact on sales.

Taco Bell says Kids Meals accounted for less than half of 1 per cent of Taco Bell's sales and the chain has not  dedicated national advertising to kids' items for at least 12 years.

Creed had been keen to junk the kids' meals off Taco Bell's menu since he joined the company in 2001, not because they were unprofitable, but because of the resources that went into producing them. The same year the company stopped ads aimed at children. As a result, by 2012, the sales of kids' meals, had dwindled to about $35 million a year - a half per cent of gross revenue.

In 2012, Taco Bell posted an estimated $7.5 billion in US system-wide sales in 2012, according to Technomic, the foodservice industry's research and consulting firm. Kantar Media showed no media spend on kids'-meal marketing at Taco Bell in 2012.

This was against McDonald's Happy Meals, which accounted for about 10 per cent of US sales. Given McDonald's reported $35.6 billion in US system-wide sales in 2012, according to Ad Age's DataCenter, that was over $3.5 billion in Happy Meal sales last year alone.

Consumer-advocacy groups saw the news as a handle for convincing other chains to consider ditching kids' meals. Center for Science in the Public Interest (CSPI) calling on Taco Bell in it's press release said: "We hope that McDonald's, Burger King, Wendy's, and Taco Bell are paying attention to Jack in the Box, which has decided to stop using toys to market fast-food meals to children."

However, the  menu items on the current Kid's Meals Menu will remain available individually on the regular menu, including the Crunchy Taco, Soft Taco, Bean Burrito and Cheese Roll-up, Taco Bell said.

The royal baby may well get to eat some of them, after all.