Canadian apparel maker Gildan Activewear Inc has offered to buy US teen clothing retailer American Apparel in a bankruptcy auction for about $88 million in cash, $22 million more than the stalking horse offer it made in November. 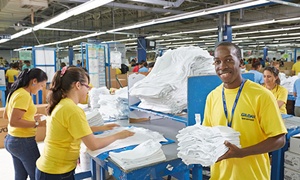 Gildan said it will buy certain manufacturing equipment, inventory and intellectual property rights related to American Apparel, but not the leases, distribution centres and e-commerce site.

Gildan did not say where it will manufacture American Apparel-brand clothing, or how it will market the products.

''We are excited to be moving forward with this acquisition. The American Apparel brand will be a strong complementary addition to our growing brand portfolio. We see strong potential to grow American Apparel sales by leveraging our extensive printwear distribution networks in North America and internationally to drive further market share penetration in the fashion basics segment of these markets.'' said Glenn Chamandy, president and CEO of Gildan.

The Los Angeles-based company had struggled with shrinking sales, as well as litigation tied to its founder and ex CEO Dov Charney. It filed for chapter 11 in the US Bankruptcy Court in Delaware in October 2015.

Charney, a Canadian-born artist and industrialist, had in January teamed up with investor group Hagan Capital Group and Silver Creek Capital Partners to table a $300-million bid for the retailer.

The board of American Apparel rejected the offer saying that the ''debtor's plan is not feasible and will lead to poor long-term recoveries for the company's stakeholders and put thousands of manufacturing jobs in Los Angeles at risk.'' (See: Bankrupt American Apparel rejects $300-mn takeover bid from investor group) Charney, who founded American Apparel in 1989 and holds a 52-per cent stake, said in December 2015 that he was exploring plans to revive the bankrupt company.

Although it has around 250 owned stores worldwide, American Apparel has not made a profit since 2009 and losses over the last five years have topped $340 million, forcing it to raise capital to make ends meet.

The company also had to contend with image problems and had been criticized for its racy advertising and sexually-charged culture.

The board officially fired Charney in December 2014, bringing to a close the saga that started with board suspending him in June for misconduct.

In their termination move, the directors had cited infractions such as failure to adhere to the chain's sexual harassment policies and using company funds for family members' travel expenses. Charney's lawyer had dismissed the allegations as ''baseless.''

The New York Times had reported that Charney, who had led American Apparel since 1998, earned a reputation for outlandish behaviour and hyper-sexualised ad campaigns and had been accused by former employees of sexual harassment several times.

Though Charney managed to survive the scandals, matters came to head when an internal investigation found that he had misused company funds.

The investigation also determined that he had allowed an employee to post on the internet nude photographs of a former female employee who had sued him.