A Texas-based company is using 3D printing technology to work out a solution to the problem of affordable housing around the world. 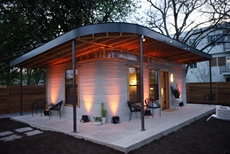 Austin startup ICON has devised a method of mass producing small homes using a massive 3D printer in a process that the company claims will take just 12 to 24 hours to build a home. The company ran a presentation at the annual film and innovation festival known as SXSW, on how it could construct a 650-square-foot house out of cement in one day.

The company has partnered with housing solutions nonprofit New Story, and hopes to achieve its vision of creating sustainable, ''quality homes accessible to everyone.'' ICON is not only focused on building homes fast, but intends to make then extremely affordable as well.

ICON, which uses an industrial sized Vulcan printer, says it can currently build a single-story home for $10,000 but is working to cut that cost to just $4,000. ''It's much cheaper than the typical American home,'' ICON co-founder Jason Ballard told The Verge.

''(ICON) believes, as do I, that 3D printing is going to be a method for all kinds of housing,'' New Story co-founder Alexandria Lafci added. The presentation at SXSW follows a report from the World Resources Institute which estimates that 1.2 billion people live in cities without affordable or secure housing.

''We have been building homes for communities in Haiti, El Salvador, and Bolivia,'' Alexandria Lafci, co-founder of New Story, told The Verge.

The massive but portable printer produces a blend of concrete that hardens as it's printed. The concrete is laid in 100 roughly one-inch-thick strands that hold their shape while they harden.

Icon cofounder Evan Loomis told Quartz the printed walls become stronger than cinderblocks after a few days of hardening, although the house is fit for occupation after it has been set up.