A slowdown in BharatNet projects that aim at achieving digital connectivity of all gram pachayats in the country by 2019 has now threatened to derail Prime Minister Narendra Modi’s pet project as BSNL and BBNL have failed to deliver. 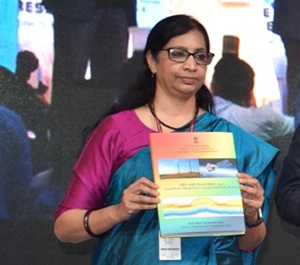 Telecom Secretary Aruna Sundararajan has pulled the chiefs of state-owned Bharat Broadband Network Limited (BBNL) and Bharat Sanchar Nigam Limited (BSNL) that are tasked with building infrastructure to connect 2.5 lakh GPs with high-speed internet by March 2019, and have warned them of strict action as the project is not progressing as desired.
Sundararajan said field reports showed that 80 to 90 per cent of gram panchayats in the country lack connectivity and where infrastructure has been built there is gross under-utilisation or non-utilisation of BharatNet.
The National Digital Communication Policy (NDCP-2018), announced last month envisions supporting India’s transition to a digitally empowered economy and society by fulfilling the information and communications needs of citizens and enterprises by establishment of a ubiquitous, resilient and affordable digital communications infrastructure and services.
The policy aims at providing broadband for all; creating 4 million additional jobs in the digital communications sector; enhancing the contribution of the digital communications sector to 8 per cent of India’s GDP from ~ 6 per cent in 2017; propelling India to the Top 50 Nations in the ICT Development Index of ITU from 134 in 2017; enhancing India’s contribution to global value chains; and ensuring digital sovereignty. These objectives are to be achieved by 2022.
The policy, inter-alia, aims to:
Bharat Broadband Network Limited (BBNL) and Bharat Sanchar Nigam Limited (BSNL) are the main infrastructure companies under the government that are working on the project to connect 2.5 lakh GPs with high-speed internet by March 2019.
“Though a clear utilisation target has already been set, the actual utilisation on the ground is understood to be less than 10 per cent of the target. This points to an utter lack of professionalism on the part of BBNL and BSNL with poor planning, lack of monitoring and co-ordination between the two organisations,” Sundararajan said in a letter to Sanjay Singh, CMD, BBNL, and Anupam Srivastava, CMD, BSNL.
Till December last year, the government had completed 1 lakh GPs under this project in the first phase, and in January, the government had announced that the second phase would be completed by December, well ahead of the March 2019 deadline. However, as of October, only 1.15 lakh GPs are service-ready. According to sources, the dispute between the BBNL and BSNL on ‘who will order whom’ is one of the main reasons for the delay in executing the project, which is seen as the backbone of ‘Digital India’.
“Given that this project is being monitored at the highest level in the government [PM], the failure to comply with or disregard of the instructions shall invite exemplary disciplinary action. The failure of both BBNL and BSNL to resolve the issues impeding utilisation of BharatNet and to put in place an effective O&M (operation and maintenance) arrangement is viewed with extreme displeasure,” she wrote.
The Telecom Secretary further said that all non-operational GPs should be made operational within 48 hours and a dedicated team should be constituted in the Department of Telecom (DoT) to ‘audit the status on field’.
“Disciplinary action shall be initiated against all the responsible officers for GPs where fault rectification is delayed beyond 48 hours,” Sundararajan added.
MORE REPORTS