Playboy Enterprises Inc, a media and lifestyle company, is exploring a sale, in a move that could fetch the owner of Playboy magazine more than $500 million, The Wall Street Journal reported, citing people familiar with the situation. 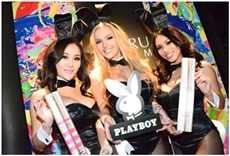 The move comes a month after Playboy Enterprises released its first non-nude issue in order to generate more advertising revenues from a wider range of advertisers.

Chicago-based Playboy Enterprises has retained boutique investment bank Moelis & Co. to advise it on a potential sale, the report said.

In 2011, Hefner teamed up with Rizvi Traverse Management and took Playboy Enterprises private in a $207 million deal.

Early this year, the famous Playboy Mansion in Los Angeles went on the market for $200 million, which triggered potential buyers seeking to purchase the entire company.

Playboy is one of the most recognised and popular consumer brands in the world. Playboy Enterprises publishes Playboy magazine in the US and abroad and creates content for distribution via television networks, websites, mobile platforms and radio.

It has also licensing agreements whereby the Playboy brand appears on a wide range of consumer products in more than 180 countries as well as retail stores and entertainment venues.

About 40 per cent of its business comes from China, though the magazine is not sold there.

Although it is still America's best selling men's magazine, it is a far cry from the 53,991 circulation figures it attained during its maiden launch 56 years ago and the November 1972 edition which sold 7,161,561 copies

In the past, Hefner had turned down many buyout offers and had said publicly that he would give the controlling rights of the company to his teenage sons, Cooper and Marston.

But any decision about a sale will ultimately come down to Hugh Hefner, where the New York Post once quoted as saying, ''Everyone says he'll never let go, that he'll take it with him to the grave.''

Although Playboy does not release detailed financial information, the Chicago-based company generated $38 million from media publishing initiatives and $55 million from licensing its brand to other companies in 2015, The Wall Street Journal said.