The Trump administration on Tuesday announced countervailing duties of up to 81 per cent on aluminium foils imported from China, following a preliminary determination that the country was dumping the product in the US. 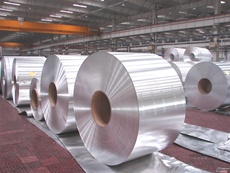 The punitive import tax on aluminum foil, which varies from 16.56 per cent to 80.97 per cent, depending on the assessment of Chinese government subsidy on aluminium products, is part of President Trump's get-tough trade measures and is aimed at offsetting China's unfair trade advantage.

The Commerce Department announced a preliminary decision on Tuesday evening to tax aluminum foil from China at a rate of between 16.5 per cent and 81 per cent, based on the subsidies it says it receives from the Chinese government.

"The United States is committed to free, fair and reciprocal trade, and will continue to validate the information provided to us that brought us to this decision," commerce secretary Wilbur Ross said in a statement. "The Trump Administration will not stand idly by as harmful trade practices from foreign nations attempt to take advantage of our essential industries, workers, and businesses."

Separately, the commerce Department is investigating into whether aluminum shipped in from foreign countries hurts US national security, which the Trump administration launched in April.

US importers bought aluminium worth around $389 million from Chinese producers in 2016, according to the Commerce Department.

The Association said it was "very pleased" by the decision.

"US aluminum foil producers are among the most competitive producers in the world, but they cannot compete against products that are subsidized by the Chinese government and sold at unfairly low prices," said Heidi Brock, president and CEO of the Aluminum Association.

"This is an important step to begin restoring a level playing field for US aluminum foil production, an industry that supports more than 20,000 direct, indirect, and induced American jobs, and accounts for $6.8 billion in economic activity," she added.

Dingsheng Aluminum Industries was hit with a 28.33 per cent ad valorem duty and Jiangsu Zhongji Lamination Materials with a 16.56 per cent duty.

The countervailing duty case against aluminum foil from China is independent of the Aluminum 232 investigation that was launched in April to determine whether aluminum overcapacity, dumping and illegal subsidies threaten American economic security and military preparedness.

In April, the Commerce Department launched an investigation to determine the threat of Chinese aluminum and its possible impact on US defence industry which uses aluminium for fighter jets.

A strong American aluminum industry is needed to support and sustain the US defense industry, Ross pointed out.