China on Saturday officially started full scale operations of the world’s largest single radio dish telescope, which it will use for space research and help in the hunt for extraterrestrial life, the official Xinhua news agency reported. 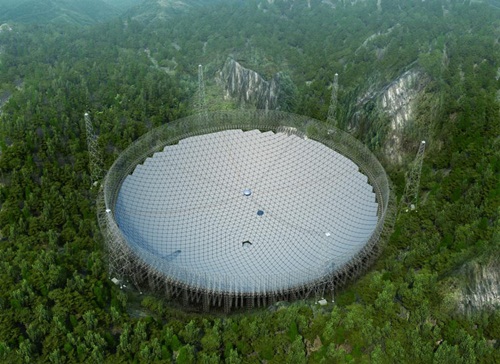 The telescope, called FAST (Five-hundred-meter Aperture Spherical Radio Telescope), has double the collecting power of the Arecibo Observatory in Puerto Rico, which has a 305 meter dish. Until now, Arecibo was the world’s largest radio dish of its type.
FAST is made up of 4,450 individual panels and is cradled in a natural basin called the Dawodang depression in Guizhou, Southwest China. It’s a fixed 500 meter dish that can’t be aimed, and it’s not only the world’s most sensitive listening device, but the world’s largest filled-aperture radio-telescope. (The Russian Ratan-600 radio telescope is a different type of design, and though its footprint is larger, it’s not as sensitive.)
The Five-hundred-meter Aperture Spherical Telescope, or FAST, is the size of 30 football fields and has been hewed out of a mountain in the southwestern province of Guizhou. It is also known by the name “Sky Eye” in China.
Russia's RATAN-600 radio telescope, which consists of a 600 meter diameter ring of reflectors that focuses radio waves onto a single conical feed antenna in the center, and has a different configuration.
Xinhua reported that the telescope had received national approval to start operations. It finished construction in 2016 and has been undergoing debugging and tests in the years since.
Fast has been open to Chinese astronomers since April 2019, and has now opened to astronomers across the world after it went through the National Construction Acceptance at the end of September 2019.
Though FAST was wholly funded by the government of China, other organisations like Australia’s Commonwealth Scientific and Industrial Research Organisation collaborated on the project.
However, usage decisions will be up to the government of China.
FAST’s chief engineer Jiang Peng told Xinhua that the telescope’s trial operations had so far been reliable and stable, and that its sensitivity was more than 2.5 times that of the world’s second-largest telescope.
The project has also obtained some valuable scientific data over that time and is expected to help lead to some breakthroughs in areas such as low-frequency gravitational wave detection and interstellar molecules in the next three to five years, Xinhua said.
Advancing China’s space programme is a priority for Beijing, and the country has set a target to catch up with Russia and the United States and become a major space power by 2030.
MORE REPORTS