LIC gets nod to invest Rs1,50,000-cr into loss-making Railways

Life Insurance Corporation of India (LIC) has got the green light to commence investment of Rs1,50,000 crore in Indian Railways, which is looking for huge investments in infrastructure and rolling stock. 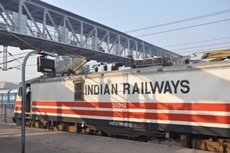 While much of the funds needed for investment will come from state-run financial institutions, the Railways has not been able to generate any significant portion of this internally.

LIC will make the investments through subscriptions to bonds issued by Indian Railway Finance Corporation (IRFC) as per an MoU signed with the Railways in March.

Insurance regulator IRDA had earlier raised objections to the proposed investment, as it would exceed 25 per cent of IRFC's net worth. However, the government has now allowed LIC to make the investment without a sovereign guarantee.

LIC has been bailing out loss-hit state firms and NPA-laden PSU banks at government's behest, obviously at the risk of policyholders. It has also been subscribing huge amounts to the government's divestment programmes.

LIC's forced investments in the loss-making Railways and banks could imperil the finances of the state-run insurer and may prove fatal for its policy holders.

A Reuters report quoting internal documents of the Railways say that gross traffic earnings, which make up the bulk of railways revenues, would fall short of the target by over Rs18,000 crore ($3 billion) in 2016-17. It also said revenues were insufficient to cover expenditure and funding via market borrowing rose to about 22 per cent last year from an average of 8 per cent between 2010 and 2015. The railways now owe Rs1,25,000 crore ($20 billion), up Rs44,000 crore ($7 billion) in the last three years.

Railways' passenger traffic has begun declining and freight earnings have started to weaken as commodities move to the cheaper road transport mode.

Without a rationalisation of passenger and freight rates, Railways will continue to lose customers and revenue. This will mean a further drain on its finances and rendering LIC's investments a drain on its resources.