The Insurance Regulatory and Development Authority (IRDA) has proposed increases in third-party motor insurance premiums varying between 25 and 137 per cent for private cars and 1 and 45 per cent for two-wheelers. 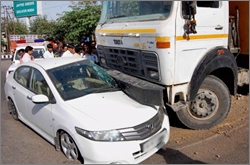 The third-party premium rates for all classes of vehicles, which is based on an actuarial formula that takes into account the loss ratios for insurers, inflation, higher awards by judiciary and other factors, is revised in April every year.

Third-party motor insurance premiums had gone up by an average 18-20 per cent last year, after transporters opposed insurers' demand for a 60 per cent hike.

While third-party premium rates have gone up across categories, in certain categories of vehicles such as mini trucks and pick-ups, IRDA has proposed an eight to 35 per cent reduction in premium rates since claims relating to these have declined.

Meanwhile, the insurance sector regulator had, in November, announced a sharp increase in the provisioning by general insurance companies for settlement of claims to 210 per cent from 145 per cent. This has been done on the basis of loss estimates by an actuarial committee.

Since third-party motor insurance has a higher claims ratio exceeding 140 per cent, according to insurers, it is highly unprofitable for general insurance companies.

Unlike the own-damage cover, third-party cover is compulsory in motor insurance to cover third-party damage in terms of property and life.