The severe cash crunch that followed the sudden demonetisation of high-value currency has disrupted economic activity across the country, especially farm-based transactions, at the peak of a harvesting period, a report from brokerage house Ambit Capital said. 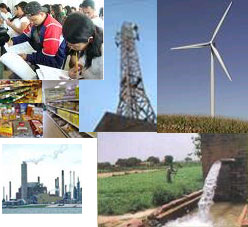 Ambit has forecast India's gross national product (GDP) for 2017-18 to be growing at around 5.8 per cent against the 7.3 per cent estimated earlier.

Although the demonetisation of Rs500 and Rs1,000 notes is expected to benefit the economy in the long term, analysts fear that the country's GDP growth could suffer in the short term, as it has adversely impacted the informal sector, which accounts for 45 per cent of GDP.

Since most of the country's informal economy as well as the agricultural sector depended much on cash transactions, a sudden crash crunch has hit these sectors hard.

And, despite the cash crunch, the finance ministry has warned people against the lure of cash and has cautioned people about black money converters looking to misuse their bank accounts.

''Person(s) who allow(s) his or her bank account to be misused for this purpose can be prosecuted for abetment under Income Tax Act,'' a finance ministry statement read.

The ministry's warning comes in the wake of reports that unscrupulous people were using others' bank accounts, especially the zero-balance Jan Dhan accounts to convert their black money into new denomination notes, paying a commission.

''It is hereby clarified that such tax evasion activities can be made subject to income tax and penalty, if it is established that the amount deposited in the account was not of the account holder but of somebody else,'' the finance ministry said.

The ministry's appeal comes amidst speculation that the government and the Reserve Bank may call halt to the exchange of old notes and instead ask people with huge cash hoards to deposit these in bank accounts.

The Supreme Court, which earlier refused to stay the government's demonitisation  order, however, refused to dismiss the centre's plea to stay cases filed in courts across the country against inconveniences caused by demonetisation.

And, despite the tough time both within and outside Parliament, the Narendra Modi government is in a determined effort to bring the shadow economy to a halt.