Reserve Bank of India (RBI) has directed Axis Bank’s board to rethink its decision to reappoint Shikha Sharma as its MD and CEO for a fourth term, amid concerns over rising bad loans at the country's third-largest private sector lender. 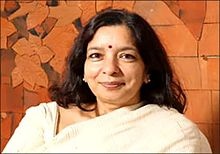 RBI is reported to have sent a mail to chairman of Axis Bank, Sanjiv Misra, who is also a former expenditure secretary, regarding the bank board’s decision to re-appoint Shikha Sharma for a fourth consecutive three-year term.
RBI’s communiqué also pointed out the bank’s performance and deteriorating asset quality condition over the years.
The decision comes against the backdrop of persisting concerns over mounting non-performing assets (NPAs) in the banking system.
According to them, the RBI's letter has also cited the bank's performance and deteriorating asset quality condition over the years.
In July 2017, the board of Axis Bank had approved re-appointment of Sharma. Her new term is to start from June 2018.
Sources said the re-appointment is yet to be ratified by the RBI.
As per regulations, appointments of top management personnel at private sector banks require the RBI's clearance.
"We wish to inform you that the bank's board follows a standard process with regard to senior appointments, and forwards its recommendations to the regulator (to the extent required). This process is currently in progress," Axis Bank said in a statement today.
The private sector lender's NPAs jumped by over five-fold in recent financial years.
The gross NPAs worth Rs 4,110 crore at the end of March 2015 surged to Rs21,280 crore at the end of March 2017. During the same period, the lender's net profit halved from Rs7,357.8 crore to Rs3,679.2 crore.
Recently, RBI had also penalised the bank for incorrectly reporting bad loans. The asset-class divergence uncovered by RBI was Rs9,480 crore in 2015-16 and Rs5,633 crore in 2016-17.
Axis Bank was in the news for alleged involvement of its staff for suspected money laundering activities and illegal note conversions during demonetisation. Income Tax Department had conducted several raids and arrested few of its employees for indulging in illegal activities during the note ban initiated on 8 November 2016.
Also, last year, market regulator Sebi had ordered Axis Bank to strengthen its systems and conduct an internal probe to fix responsibility as the initial investigation showed the leakage of price sensitive financial information was due to "inadequacy" of processes at the bank in the WhatsApp leak case.
MORE REPORTS